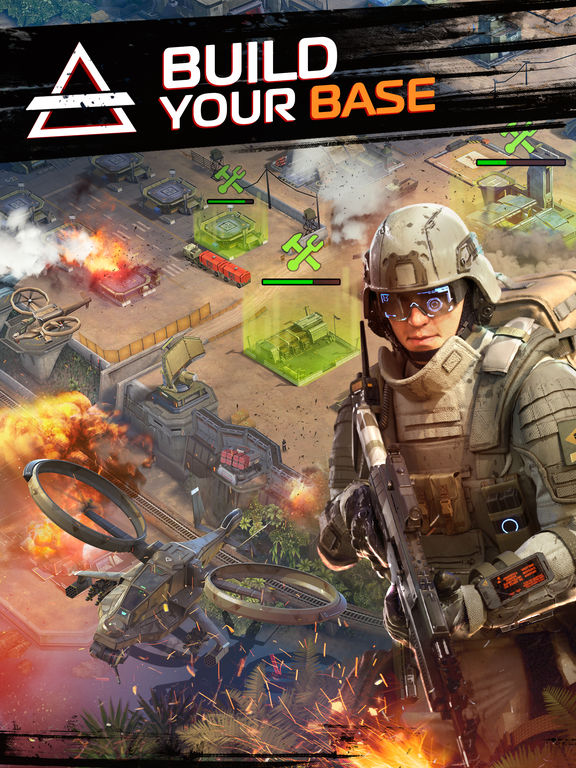 Soldiers Inc: Mobile Warfare is a sci-fi base management game. In the distant future, a lifesaving serum has been seized by the Phoenix Corporation. The entire world has declared war on them, and now every military and mercenary force in the world are after them. You are a commander of an elite division of soldiers, and now it’s your chance to get at the Phoenix Corporation! Let’s get you started with our Soldiers Inc: Mobile Warfare cheats, tips and tricks strategy guide!

For a majority of the early game, you’ll be just tapping away completing quests and speeding up buildings with free bosts. Once a quest is completed, you’ll be able to claim the reward at any time by tapping the button at the top left corner of the screen. Before you do this though, make sure to check your current supplies. Are you nearing the cap on any of them? If so, you should hold off on turning in the quest. Most of the rewards you get early on are just more resources, but if you keep accepting the rewards right away, you’ll hit your cap really early. This means that you’ll just end up wasting the rewards. Make sure that you have space for the resources!

When you get to select which annex building to construct, we highly recommend building the Boost Annex. Annexes will automatically generate a resource of your choice over time. At the level you first unlock them, you can only select between the three main resources and the boost annex. The quest rewards combined with your resource structures means that you shouldn’t really have a problem with resources, so building the boost annex is optimal. Boosts save a lot of time if you’re playing the game a lot, so they’re invaluable!

Once you reach level 5, you will be rewarded with an extra construction slot. You can build up to two buildings at a time now! However, the extra slot is temporary and deactivates automatically after three days. You should take advantage of this time and build as many buildings as you can.

As per the norm for games like this, joining an alliance as soon as possible will only be beneficial to you. You’ll want to join one as soon as it unlocks, if only for the potential building boosts. Alliance members can help you with construction, reducing the amount of time the building takes to finish. It’s like using a boost except it’s free! Alliance members can also help you out whenever you’re attacked by other players. Join one as soon as you can!

You won’t have to worry about this until much later on in the game, but be sure to check your gear before sending your army out. As the game teaches you, each piece of gear will boost a certain type of unit, making them more powerful. Units are categorized into four types: light infantry, mechanized infantry, armor, and combat aviation. If you’re planning on sending a squad out that is comprised of mostly one type, try to match your gear to give them the best boost.

That’s all for Soldiers Inc: Mobile Warfare. If you have any other tips or tricks to share, let us know in the comments below!