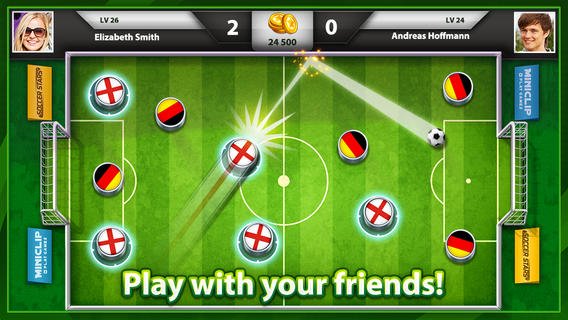 Soccer Stars available on iOS is a game that relies on you playing against others in order to win coins.

It is a turn based game which is reminiscent to Air Hockey. If you are familiar with MiniClip games especially the 8ball pool game, then the shooting mechanics will not take long to get to grips with.

Read on for OUR Soccer Stars Cheats: Tips and Strategy guide in order to help you out play your opponent.

1. It’s all about the angles
The game requires you hit the ball into the goal, therefore the angle of your player and the ball has to be considered.

Even from a distance you can quite easily score, as mentioned the game is similar to Air Hockey where you can use the walls to bounce the ball off, so even if you cannot score in a straight line if you know your angles there will be a chance to hit it off the wall or opposition player.

You can use the practice offline option on the top right corner of the screen in order to help you get used to the games shooting mechanics.

2. Best formation
You will have four formations to choose from, the 1-2-1 is the best formation to use. Although this looks more like a 1-1-2-1 as you have five players at your disposal. This is the default formation that is set up when you start the game.

3. Defend and be patient
It is best to keep three players at the back, when stating with the 1-2-1 formation it is best to use one player as much as you can.

It is sometimes not possible to, however as a general rule it is good to get in the habit of using one player to try and score and leave three at the back to cover your net.

4. Use the opposition to help you
Try to manipulate the opposition by crashing into them and moving their players around. A good tactic is to leave three at the back, use one player to shoot with and then use the other player to make space.

You can use one player as a battering ram and to knock the opposition defenders out of the way while making a good angle for a shot.

This is it! These are for now our Soccer Stars tips and tricks, hopefully they will give you an advantage over your opponent next time you play! 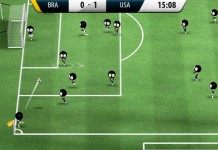 Stickman Soccer 2016 Launches, Make Sure to Get It! 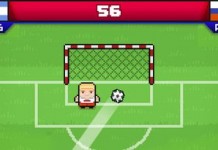 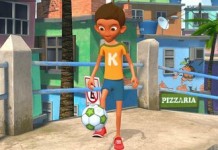