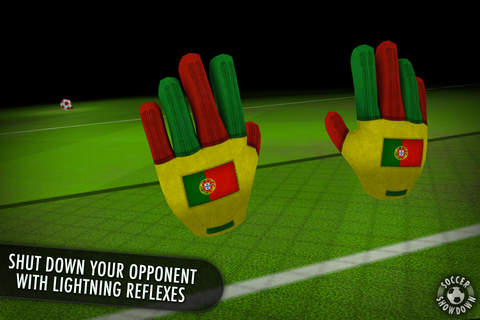 So read on for some tips for Soccer Showdown that will hopefully improve your game and turn you into the best goalkeeper and scorer in the history. World Cup final, here we come!

1. Shooting
The game begins with a short tutorial on the game physics. When shooting, two of the most important techniques are power and curve. A hard shot moves a lot faster and is harder to save, however there is less margin for error. A fast shot has to be accurate in regards to the direction whereas a less powerful shot is more forgiving. Adding curve to your shot is a great way to deceive your opponent as it is much harder to anticipate and predict where the ball is going to end up.

2. Goalkeeping
When trying to save a shot from the opponent it is tempting to follow the ball around as it is kicked towards you. This is not the best way to save as mentioned the ball can curve and may be heading for one area and then take a considerable turn towards another. The best thing to do is to emulate a real life penalty situation, and that is to pick a direction before the kick is taken and take your chances.

3. Options
When playing through there are two options you can choose. The first being Online and the second being League. Online play puts you up against a human opponent a where their behaviour can be a lot harder to predict. One common method when goalkeeping used by both human and AI players is to leave a gap in the goal to try and persuade you to shoot towards the empty space. The best thing to do is to shoot for the middle as they will most certainly commit to diving fast towards the corner they have left exposed.

4. Pacing
When playing in Online mode it is best to put power on your shot. In the League mode you can fool the AI by using less pace on you shots, as once it has committed to an area the AI does not move back on itself, whereas a human player can.

5. Anticipation
The speed in which you move when saving is all important. Therefore being able to anticipate where the ball is going is an important skill. The best thing to do is to lower your gloves to give you a full picture of the ball and its movements. Also keep your gloves dead centre until the kick is taken, you will always be fast enough to cover any area of the goal so there is no point of moving the gloves around from side to side.