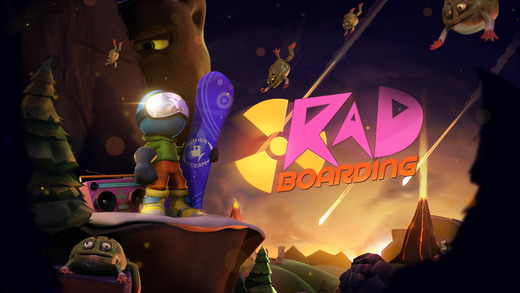 A new unique snowboarding game has been released today on the App Store, a game that will make players try to run from the end of the world on their snowboard.

RAD Boarding, developed by Other Ocean Interactive, is a rather unique snowboarding game where players will have to race against the Apocalypse. As in several other snowboarding games, it will be possible to perform a variety of tricks and combos that will award players with points. The game also includes plenty of content to unlock like extra costumes and more, content that can be unlocked by collecting some weird frogs that pop out every now and then during the game. Last, but not least, RAD Boarding also features some exciting boss battles that will put players’ skills to the test.

RAD Boarding is a game that all fans of snowboarding and platform games have to check out thanks to its fast paced gameplay experience, interesting gameplay features and colorful graphical style that make the game a joy to play. If you’re interested in the game, you can download it for free on the App Store in all regions.