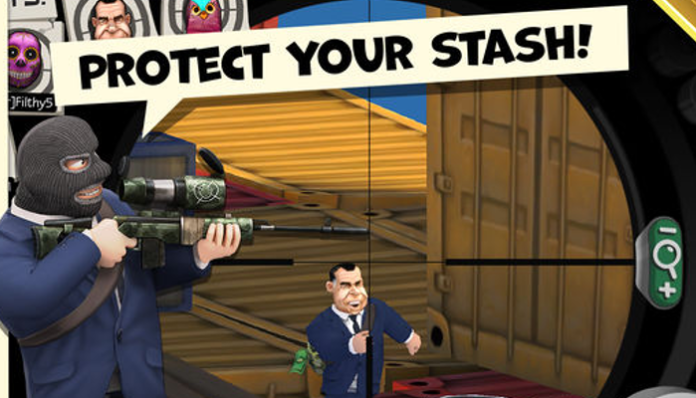 It’s multiplayer mayhem in Snipers vs Thieves, a real-time competitive action game in which you either rob the banks as a thief, or take out said robbers as a sniper! Our Snipers vs Thieves cheats and tips will teach you how to become the ultimate thief, dodging sniper fire left and right, and how to train your trigger finger to become a master sniper.

As a sniper, it’s very easy to tunnel vision a single thief. Try not to stay zoomed in for too long – it’ll obstruct the view around you. You need to stay alert and constantly look around the whole area to make sure that no other thieves are trying to snoop by.

If you’re hunting a single thief, try to watch his movements and take notes of how he’s moving. You can tell how much stamina a thief has by how fast they’re moving, and they almost always have to stop and rest upon reaching a new checkpoint. Take advantage of their downtime and check for other thieves!

Aim for the vital spots!

Headshots, headshots, headshots! Body shots are always good but they might not take out the thief in one shot, which you want always. The less active thieves scurrying around the better your chances of stopping all of them! It is difficult but if you can steady your hand and land a headshot on a thief, it is almost always guaranteed that they’re as good as dead!

Depending on the angle, you might even be able to poke a hole in the thieves’ bags. Shooting bags will cause thieves to start gradually losing money. If you damage their bags enough, even if they escape they won’t have anything to show for it! Breaking their bags is a good alternative if you can’t just outright take them out.

You can bring up to three (depending on your level) gadgets with you. Sniper gadgets come in three different flavors: ammo, support, and trap.

Ammo grants your sniper shots various damage bonuses. Support gadgets give you auxiliary help, like radars that can locate thieves. Trap gadgets can inflict various status ailments on thieves, making them easier to take out.

Each gadget can only be used a certain number of times, but they’re refreshed whenever you start a new game, so don’t hesitate to use them!

When moving between cover, be sure to pay attention to the green arrows that appear over them. A full green arrow designates standard cover. A half filled green arrow means that the cover doesn’t fully, well, cover you!

You should be careful, especially if there’s another thief trying to take cover there. A cracked green arrow means that the cover can be destroyed with enough sniper shots, so move quickly!

Rest before you move!

Your blue gauge is your stamina and drains as you move between cover. When reaching new cover, be sure to let this refill ALL the way before you move again. Better safe than sorry! Note that you can also perform a dodge roll by swiping up as you’re moving.

While this is great for evading sniper fire, it takes a chunk of stamina and you can only do it twice before you’re completely spent. Whatever you do, do NOT run out of stamina mid run. Doing so tires your thief out and he slows to a crawl, making you a sitting duck. If the sniper is paying attention, you’re probably done for!

Sprinting requires energy – the yellow gauge. Sprinting is the ultimate risk vs. reward maneuver. As you learned in the tutorial, energy is only built if you taunt the sniper which is extremely dangerous! Stay alert and try to gauge where the sniper is currently for.

If you’re seeing your buddies under fire, then you might be able to get in a couple seconds of taunting. If you’re able to build a full gauge of energy, you’ll be able to sprint to new cover, making it really hard for the sniper to land a shot on you.

That’s all for Snipers vs Thieves! If you’ve got any other robbing or sniping tips to share, let us know in the comments below!