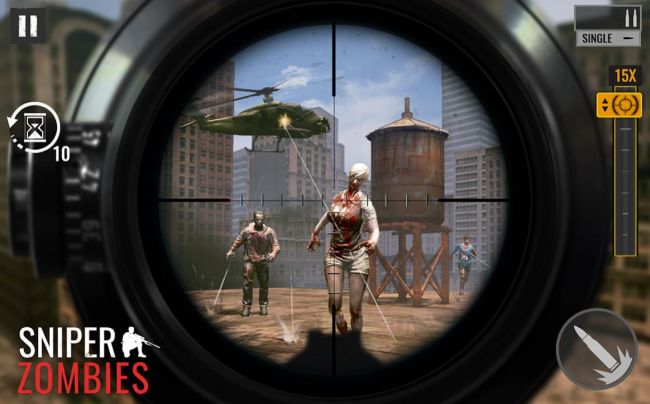 In our article today we are going to dive into the Sniper Zombies tips and cheats to help you take down more zombies and help your team survive the zombie apocalypse.

This game is exactly what the title suggests – a game where you are a sniper and have to destroy zombies from afar. You will help your comrades evade zombie attacks before they can reach them, and try to perfect your aim so that you will never waste a bullet.

As someone who isn’t too much into shooting games, but love post-apocalyptic zombie scenarios, I found Sniper Zombies to be extremely fun because as a sniper, you don’t have to watch your back and shoot – so you’re quite safe (can’t say the same about your comrades if you fail to shoot the zombies though)!

But enough chit-chat! You came here to learn all the Sniper Zombies tips and tricks, so that’s exactly what we are going to do. So without further ado, let’s dive right into them!

Headshots are the best way to take down any kind of zombie. While later on some zombies are more tough than others, by landing headshots you can pretty much rest assured, they will be taken down.

It is not always easy to aim for the head, as some zombies can jerk around and make it more difficult for you to hit the head while moving. I suggest that you have a little patience and wait for a pattern in the zombies’ movements, because that can help you hit the head much easier.

Also, there is probably no need for me to say that you need to always use the zoom tool to zoom in on the zombies to actually make sure that you don’t miss!

Locate the zombies then zoom in all the way

This is the easiest thing that you need to locate the zombies. Basically just move your weapon around a little, until you see something moving (without the zoom in). That will help you see the zombies easier, because usually the surroundings are still, and anything that moves is possibly a zombie.

Once you located the approximate whereabouts of the zombies, then zoom in right away and try to steady your aim to shoot their head! This will help you take down zombies a lot easier, so practice a little bit in the early levels and you will discover that you will get better with every shot you take.

The game’s Main Missions are basically the story line of the game, or the main quests which will help you progress in the game. You can complete them by defeating zombies in various stages, so just tap on the Play button -> Main Mission -> Select the map where you want to carry out your mission (Atlanta, Prison, Middle East and so on) -> Select the Main Mission red pin, which will show you your current progress.

There will be several pins on the map, depending on the kind of missions you can find there. The most important ones are the Main Missions, but the rest will let you complete various other tasks which might also come in handy.

I suggest that you always check out all the missions that are in an area, and try to complete the ones which are the easiest and give the most rewards first. By doing that you will allow yourself to upgrade your weapons faster.

Watch an ad to double your mission rewards

Once you complete a mission, no matter what kind of mission it is, you’ll receive Money. The Money is the currency used to upgrade your weapons, which will let you destroy zombies much faster.

In order to double your rewards, you need to watch an advertisement when the option appears in the post-game interface. Do that if you want to get a lot of funds fast, because it will help you all throughout the game!

The Achievements are tasks which you can complete once and they reward you the premium currency, Gold. I suggest that you first take a look at all of the available Achievements to see what their requirements are, and then you start slowly working towards completing them all.

Completing all the Achievements will come in time, but worry not – you’ll get them all done sooner or later, just read them first to know what to expect in terms of requirements.

Get more Gold for free

As a f2p player it will not be super easy to get Gold. But if you are patient enough and don’t mind spending some time watching ads, then there is an option that will appear in the game’s main interface.

This option will ask you to watch an advertisement in exchange for receiving some free Gold. Watching an ad will take at most 30 seconds, and in return you get 2 Gold. It’s something that you can pretty much “farm” if you are a f2p player (by watching as many ads as you can every day) because the Gold will add up and eventually you’ll be able to afford that weapon you want!

Buy better guns and upgrade them

You can buy various guns when you check out the “Gun Store” (Play -> Gun Store) and there you will find several types of weapons: Sniper, Rifle, Shotgun, Pistol and Special. Depending on how you like to play and the type of missions that you are dealing with, sometimes a sniper weapon will do better, while other times a simple shotgun will do the trick.

I suggest that you save up your money for start and just play to get used to the game’s system and zombies, and then, once you completed the first map (Atlanta) then you consider investing into another type.

Don’t spend all your savings on upgrading the very first weapon, because you will most likely change it sometime soon – instead, just save money and make upgrades to the weapon when the game asks you to do so.

Upgrading a weapon is very important, because it will increase its stats that are listed on the right side of the screen when you tap on the weapon (damage, recoil, zoom, stability and so on). Eventually even the very first starter weapon can become fairly good, but late game a better weapon will make a huge difference. So I would suggest investing into one of these, once you save up some currency.

These would be all of our Sniper Zombies tips and tricks that we have for you right now. Do you know some more useful game tips and strategies? Feel free to share them with us by leaving them down in the comments section below.