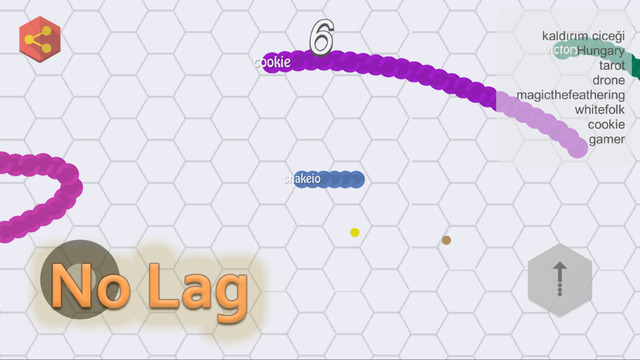 Become the biggest snake! Snakeio is another entry into the ever popular io series. In this io game, you’ll play as a tiny snake. Eat pellets to grow bigger, then take out other players and eat their pellets to get even bigger! It’s a snake-eat-snake world in this intense io game, so we’re going to help you become the biggest snake with our Snakeio cheats, tips and tricks strategy guide!

So, if you’re coming into Snakeio, chances are you’ve played an io-type game before. Just a couple weeks ago we did a guide on a very similar game called “Slither.io”. If you played that, you know what to expect here, and you know that there are several ways to play!

The random pellets that spawn around the map will increase the counter at the top of the screen by one. The counter is a general representation of how big your snake is, so keep collecting those pellets. When a player or bot controlled snake crashes, they will leave behind pellets that are bigger than the normal sized ones. These player-created pellets are worth five instead of one, so be sure to scoop them up as fast as possible! If you’re still kind of small, you can also let someone else do the work! If you see other snakes attacking each other, stick around but don’t get too close. When one finally does win, you can swoop in quickly and nab all of the pellets.

3. Use your boost to perform tricky maneuvers!

Tapping and holding the boost button at the bottom right corner of the screen will make your snake boost forward in the direction you’re facing. This technique can be used to pull of some tricky maneuvers, and is especially helpful if you’re trying to trap another player snake. You can quickly pull ahead of a snake and encircle it, or use it to get out of a potential trap yourself. Just be careful – other players will try to trip you up with it as well, so be on the lookout! Keep in mind that you lose a couple of pellets for as long as you hold down the boost button.

Once you get to a decent length, your snake will be quite formidable. You can use your own body defensively and offensively! Just like in Slither.io, colliding with your own body will not result in a crash so if you’re getting cornered by multiple snakes, make a “barrier” by rotating your body around in a circle. You can hide within yourself, essentially! And, as mentioned above, you can use your massive body to trap players within a space with no way out.

That’s all for Snakeio. If you’ve got any other neat tips or tricks to share, leave a comment below!