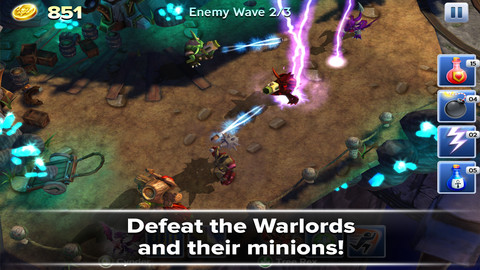 The successful iOS entry of the Skylanders franchise, Skylanders Battlegrounds, is now available for free on the App Store, Activision confirmed.

This isn’t a limited time promotion but a permanent change. This is definitely not good for those who have purchased the game for $6.99 but there’s no denying that this move will make the game even more popular.

Skylanders Battlegrounds is a really interesting game combining turn based exploration and real time combat. All movements during the stages are done on a hex-based grid. Everything changes once your Skylander gets into contact with an enemy, switching to an elemental arena where you will have to fight waves of enemies. Combat in Skylanders Battlegrounds is done in real time by drawing a line between your Skylanders and the enemies. It’s a quite simple system that however manages to work very well in the context of the game.

Unlicking Skylanders, new powers and items can be done by gathering gems or by going the easy way, by using real money to purchase them. All Skylanders figures available until now are compatible with the game so they can just be scanned and used as in other entries of the series.

Skylanders Battlegrounds is now available for download for free on the App Store.