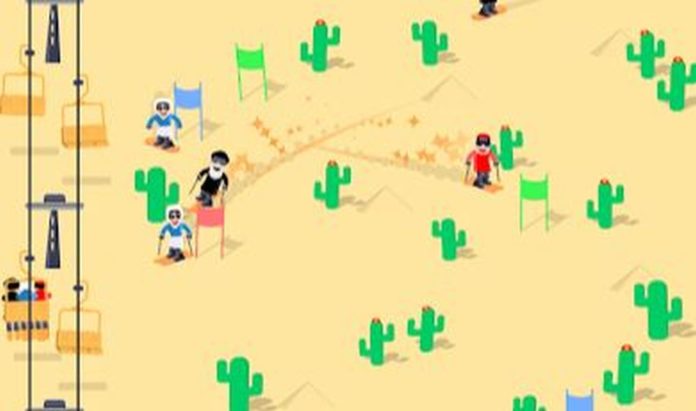 In today’s article we are going to share with you all of our Ski Tycoon tips and cheats you need to follow in order to have a prosperous ski station full of skiers (which bring lots of money, of course).

So if you are curious to see how you can unlock all the ski stations and get hundreds of skiers, then look no further because we will tell you everything you need to know. From which upgrades to do first, to how to use ads to make a lot of money in a very short time, we’ll cover everything!

So let’s not waste another second and dive right into the Ski Tycoon tips and tricks right here below! 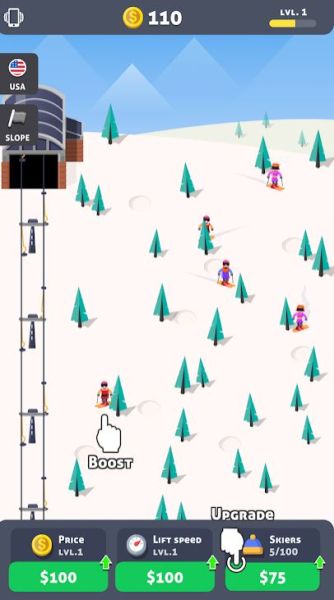 Tap, tap, tap, to speed everything up!

Whenever you will tap on a skier it will gain a temporary boost that will speed it up by quite a lot. You can do this for every single skier on the sledge, so they can gain quite a lot of speed and bring you a good profit.

I suggest that you do this at the very beginning, when you still don’t have that many skiers to bring you a hefty income. I have also found the best spot that you can do this in, without moving your finger around the screen for too long.

If you keep your finger one third of the screen down (from the top of your phone) and position your finger next to the top cabin, you can quickly tap between the skiers than go out of the cabin and those to get a lift up.

If you quickly tap left and right here, you will speed them up constantly so for the early stages where you still don’t have a lot to work with, this will bring in good money.

There are quite a few things you can upgrade in this game, from cost to skiers and even slopes. But what I want you to focus on mostly here is the right upgrades. You don’t have a lot of money at start, so even if you spend 300 cash it will feel like a lot!

What I want to show you now is how to make the upgrades to get back quickly the money you are investing. But first, let’s see what each upgrade does: 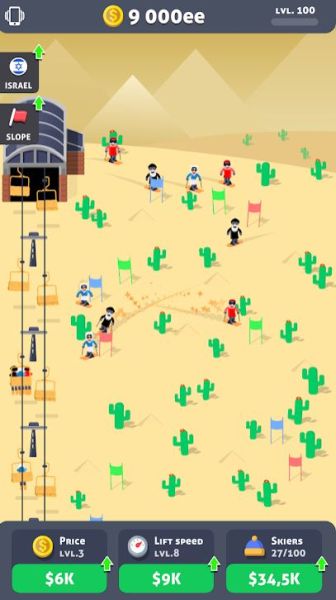 – Price: increases the price the skiers pay to enter the slope.

– Lift Speed: upgrades the speed with which the skiers are picked up and taken to the top of the sledge.

– Skiers: increases the number of skiers that can be at any one time on your slope.

– Slope: increases the number of slopes and therefore more skiers can go down at the same time.

In my opinion you should make the first upgrades to the Skiers, because the more skiers you got, the better the income they produce! Secondly, focus on the Lift Speed. The price will come last, and the Slopes you should unlock as soon as you see them available.

This is how I did my upgrades: firstly, I put 7 points in the skiers. After that, I leveled up the Price to level 5, and added another 6 levels to the Lift Speed. After doing this, I focused again on the Skiers and leveled that up to 30.

Soon after, I realized that the slope was getting crowded, and started adding points to Lift Speed. After these, I kept adding 1-2 levels in what ever else was available, and I didn’t even feel the income gap at the early stages. The money kept rolling in pretty fast, so it all worked out perfectly! 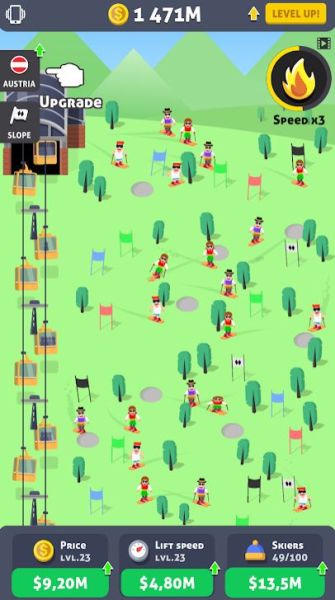 Watch an ad to double your money for leveling up

Whenever you level up you receive some money. This amount of money can be doubled if you take the time to watch an advertisement. I always did this, especially in the very early stages, as every single buck counts!

After you reach later levels, it will be easier to gather money, so you won’t really have to watch anything, but at the very early game stages, it will help a lot.

Whenever you reach certain levels, you will unlock new areas with new slopes and ski stations. Some of them are a little bit… unconventional, to say the least, but they will be quite fun to watch and manage!

Take advantage of the limited boosts

On the top right corner of the screen, every now and then a little bubble will a certain boost. Always try to tap on them, because they will stay there for a short, limited time only!

The Yeti will boost your skiers’ speed, which results in increased profit. (also, all of the skiers will turn into mini Yetis!)

The Flame will give you a Speed boost overall, from skiers to the line.

The Money Sign will give you a boost of EXP and money! 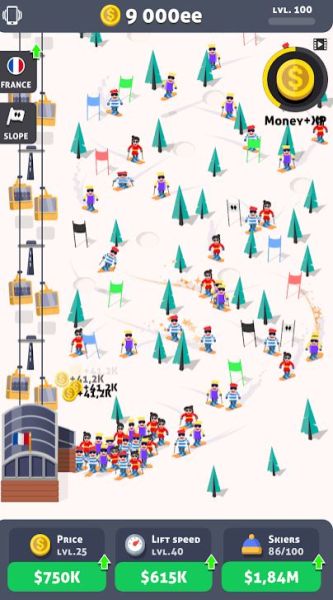 All you need to do in order to activate them is watch an ad and you’re done! It’s definitely worth it, because the boost you get from them can help you gather all that money necessary for the upgrades.

The title is self explanatory – don’t start working on the next ski station just yet. Rather just finish upgrading the previous station through and through, and only when you finished with it move on to the next one.

The reason why I don’t recommend that you do this is because every newly unlocked ski station, even if they give increased income, they will also cost much more. So it’s best if you just finish your previous one first and only after move on to the next one. That way you will ensure a certain source of profit and you won’t have to go back and forth between stations. 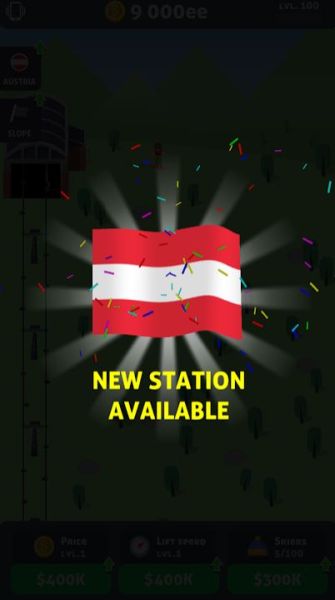 These would be all of our Ski Tycoon tips and tricks that we have for you right now! If you know some other cool tips that helped you level up fast, share them with us down in the comments section below!