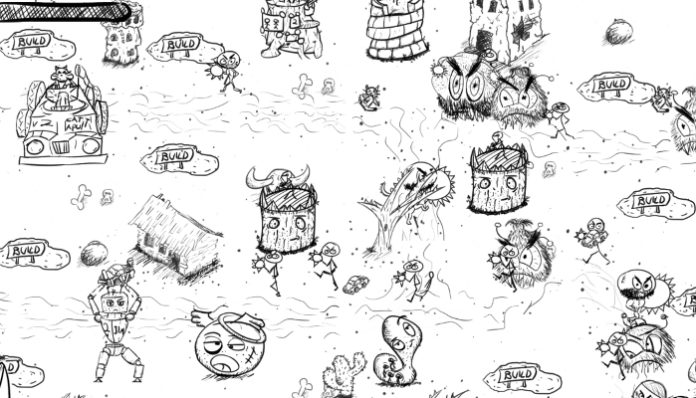 Welcome to Sketch Wars, a new tower defense game by the creative minds of Shugo Studios. If you took a sketch book full of children’s scribbles and doodles and brought it to life in the tower defense genre, you would end up with Sketch Wars.

In the world of Sketch Wars, your kingdom is under assault by creatures of dubious, hand draw origins… literally! The player’s goal is to defend their kingdom successfully from a variety of wacky enemies that really look like they have come straight out of someone’s sketchbook.

Players have three types of towers at their disposal: Archers, Heavy, and Gods. Archers are your tried and true tower defense towers, which are no-nonsense towers focused on dealing lots of damage over time. Heavy towers focus on big, hard hitting attacks that take some time to prepare and launch. Gods are the special towers that can perform a wide range of effects.

In addition to the towers, players also have eight magic spells that they can wield in battle themselves. Rain down a thunderstorm upon your enemies or just straight up drop a fireball on them. Use them in conjunction with your towers to bring on the pain!

And if your towers are not being direct enough, players can manually take control of a tower and control it directly. This offers much more accuracy if you want to take out certain units, which is a really cool feature!

The sketch kingdom needs your help! Sketch Wars is available now on the App Store and Google Play Store.