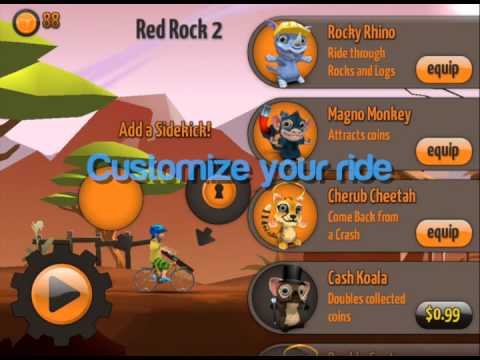 The first game published by Global Gaming Initiative, Sidekick Cycle, is available now for iOS and every purchase of the game helps support children living in poverty.

The simple yet fun one-touch downhill biking game developed by Berlin-based studio It Matters Games includes over 30 different tracks, trick courses, and other rides set in various locations around Africa and North America. Not only can players customize their bike of choice, but they can also select a sidekick from a number of different adorable little animal companions who each offer their own unique bonuses.

Global Gaming Initiative donates 50 percent of all proceeds generated by Sidekick Cycle to the World Bicycle Relief charity; raising enough money to purchase a new bicycle for a child living in poverty for every 385 times the game is purchased and downloaded.

A trailer (which can be seen above) has been released to mark the game’s release and Global Gaming Initiative’s CEO Elizabeth Sarquis made a public statement celebrating what the release of Sidekick Cycle has begun: “We’re not just a game company, we’re a giving company. Today represents the realization of that dream for us.”

Sidekick Cycle is currently available for $0.99 on the iOS app store.