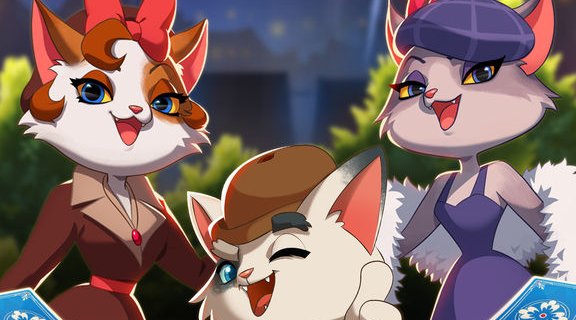 King decided to take a break from all the Candy Crush Saga and other Saga games and deliver something different: a card game! Suffle Cats is the name of the new game from King and, just like all their other products, it’s extremely easy to play and at the same time insanely addictive. It is based on the Rummy game (but with simplified rules), so many of you will probably feel at home with it. And we’re here to help everybody get better at the game by sharing some Shuffle Cats cheats and tips to help you win all games!

The truth is that, just like most games out there, King’s latest title is one where luck plays a major factor and you could still lose if you are extremely lucky, no matter how strategic you play. But for all the other occasions, we’ve got you covered so let’s check out our Shuffle Cats cheats and tips below!

1. It’s all about the Lucky charms
As you progress through the game, you will unlock various Lucky Charms that give you special powers in the game. The first one that you will unlock and against which you’ll be playing many of your games is the Queens & Kings charm which gives double points for playing these cards. So make sure you make everything out of your Lucky Charms and use the bonuses to your advantage.

For example, when holding a Queens & Kings charm, you should always try to pick up any dropped Queens or Kings by your opponent, as long as they are not completely useless. If you have something that could, at least in theory, help you create a set, pick up that card instead as it’s worth double points. Also, try to only dump into the discard pile a Queen or King as a last resort if the opponent has the Lucky Charm: you don’t want to help them get more points easily, do you?

2. Try to remember the cards
I’m not saying that you should become a Pro and start counting cards or something similar, but paying attention can save you from a lot of trouble. Once, I was waiting for a 7 of spades for a match, without realizing that I will never get it since it was already played alongside two other 7s on the board. Pay attention to the discarded cards as well and try to remember which ones were dropped (as well as which ones were picked by your opponent if they don’t use them immediately!) in order to improve your chances of actually matching the cards you have in your hand. Knowing what has been played and what options are no longer possible for your deck is key to victory!

3. Don’t hold onto the cards!
This is a double edged sword, but usually it’s best to just play the meld that you have and worry about getting more points later. If you keep the cards locked in your hand, you will only draw a new card each turn and chances of getting the one you need drop. But if you play 3 or 4 cards in one hand, even if things don’t look insanely good in your hand, things could completely change since you will draw back just as many new cards. It’s true that your opponent can get extra points by adding cards to the ones that you played and sometimes this could win them the game, but it’s usually better to just play the cards as soon as you have them instead of waiting with them in your hand for that final blow!

4. Get all the freebies
There’s not a lot in terms of free gems that King is offering its players, and that’s why you should take advantage and claim all freebies that are offered every few hours in the game. That’s enough to give you a free play in case you run out of Gems completely and basically get you back on track. You can also play the minigame for free once per day.

Also, it seems that the Gold bars can only be used to play the Mini Game right now, so don’t hesitate to give it a few shots if you run our of Gems. It is possible that with future updates King will introduce more uses for the Gold Bars, but right now you should use them for making extra money. And don’t risk too much: when you have one life left in the minigame, collect your Gems and enjoy, otherwise you will only win 1,000 no matter how many you had.

5. Change the order of the cards
You can tap the button in the lower left corner in order to change the order in which the cards in your deck are arranged. Try to do so for a fresh look over your cards and maybe new ideas, but try to find one that works best for you and stick to it because it can get confusing if you keep changing the order. But whatever you do, make sure that you always play all the possible cards in your turn.

6. There’s just one of each card!
Also something extremely important to have in mind: there’s just one of each card, so usually if a card is discarded and definitely if it’s played in a meld, you should consider it gone. There are some occasions when the discard pile will get shuffled and you will have a new chance at getting your required card if it has been discarded previously, but that’s a big risk. Instead, just try to find a different set to work on!

As I said, Shuffle Cats is a game where luck matters a lot, but hopefully the strategies that I have shared with you will help you get the edge when you’re just as lucky as your opponent. If you have other tips and tricks for Shuffle Cats, don’t hesitate to share them with us in the comment section below.