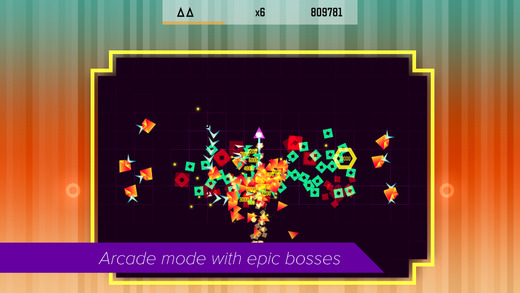 Trigonarium, the shooter game developed by Kimmo Lahtien now available on the App Store, is one of the best dual stick shooters ever released on iOS. The fact that the game has received plenty of post launch support introducing new stages and features has only made it better.

This nice shooter game has recently received a brand new update which introduces new content. The biggest additionare the new Ultimate levels, which include new elements, score bonuses that power up weapons, extra lives, new enemy formations and more. These stages are especially intense and difficult so be prepared when trying to complete them. Unfortunately it seems like this will be the final update to get released for the game but with the amount of post launch updates, there’s really nothing to complain about.

Another Trigonarium update has been made available last month in all regions. This update introduced MFi controller support for the game as well as a new co-op mode and two challenge modes called Classic and Super which spice up the experience with new mechanics and more.

Trigonarium is now available for purchase on the App Store. The new update is also available right now so make sure to play the game again to check out all the new additions and changes for yourself.