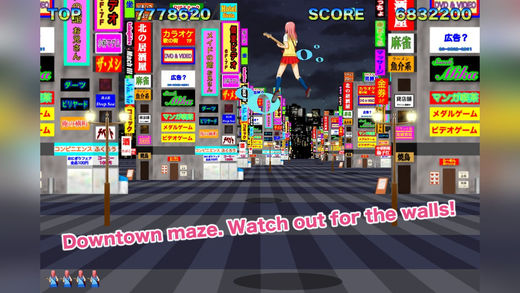 As if it wasn’t clear enough from the game’s name, TravelShooting JP is a Japanese game developed by Takuji Fukimoto. It really couldn’t have been any other way as only Japanese developers could make a schoolgirl the main character of a shooter game.

Those who have been playing video games for some time will surely notice how the game looks, and actually plays, like the SEGA arcade smash hit Space Harrier, only that you are controlling an anime schoolgirl armed with a guitar shaped gun.

Even though the TravelShooting JP gameplay experience isn’t all that original, as it’s basically Space Harrier with a different character and setting, the game is still a rather enjoyable experience. The main goal of each stage is to defeat as many enemies as possible without dying and fight huge, and most of the times over the top, bosses like a big red dragon, a giant shark firing rings of bubbles at the end of the stage. The schoolgirl shoots automatically and her movements are controlled with both tilt and touch controls, which work incredibly well.

TravelShooting JP is now available for free on the App Store. The game may not be an innovative or original experience but it’s incredibly enjoyable, also thanks to the  unusual and wacky setting.