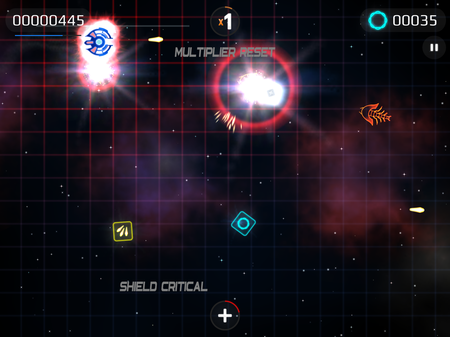 A new interesting space shooter game is going to be released on the App Store next month, a game which combines some popular gameplay mechanics to offer an engaging experience.

Star Drift is a space shooter game currently in development by Squarehead Studios. Even though this is the first game developed by the team, Squarehead Studios is hardly an inexperienced team as one of the team members has worked at Retro Studios and Rare, among other teams.

In Star Drift, players will control a spaceship with controls that closely resemble the smash hit Flappy Bird. To make the ship go up, players will have to touch the screen and keep it pressed while stop touching will make the ship go down. Players will have to mostly focus on movement, as the ship shoots automatically. Plenty of power-ups will make the experience more varied, granting the ship various enhancements and different shooting patterns. An upgrade system is also going to be in, allowing players to purchase various enhancements and items.

Star Drift will be released on the App Store sometime during February. We will let you know precisely when the game hits iOS devices as soon as more comes in on the matter so stay tuned for all the latest updates.