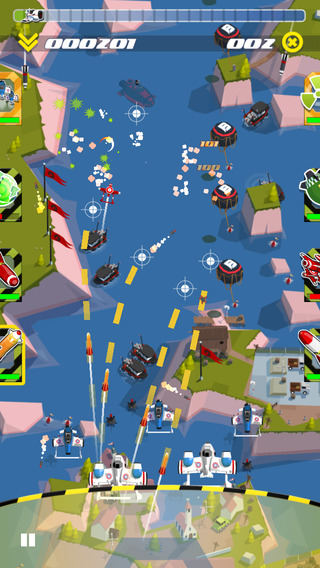 A really interesting shooting game is now available for purchase on the App Store, a game that will allow players to decide which way their deadly missiles will go.

Sky Patrol, developed by Beartrap Games, is a really interesting shooter game where players will have to draw paths to launch their missiles, which will follow the traced path. This means that it’s possible to be really creative with the paths, creating some really twisted paths that missiles will follow until they hit a target. The gameplay experience is made more varied by the different type of available weapons, which behave somewhat differently from the regular missiles like bombs and more.

Sky Patrol has been clearly inspired by classic arcade shooter games, but it plays nothing like them, as the overall experience is much slower. This doesn’t mean that things don’t get hectic, since you will have to deal with plenty of enemies, and plenty of missiles, in later stages.

Sky Patrol is now available on the App Store for $1.99. The game is a unique take on the shooter genre so make sure to check the game out if you’re a fan of old school shooters. The gameplay experience is not as fast paced as older games but the game’s unique features still make Sky Patrol a remarkable experience.