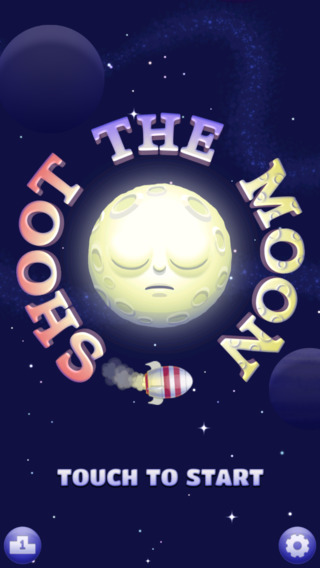 The moon has taken it upon himself to never stop singing the old orchestrated song, “In the Hall of the Mountain King”. It’s great that he appreciates the classics, but it’s getting rather annoying since he won’t stop. Shoot The Moon is a simple one-touch arcade game that involves you launching rockets at the moon in order to get him to shut up. The rockets are only annoying him, you say? Keep doing it, and we’ll help you break high scores with our Shoot The Moon cheats, tips and tricks strategy guide.

Are you ready to shoot for the moon? We’re going to land in the stars with our Shoot The Moon cheats, tips and trick strategy guide.

Every time you do land a 10-point hit, you’ll earn a segment of the double multiplier. Once you get three consecutive long shots, the double multiplier will activate and as long as you continue to get long shots, every shot will be worth a whopping 20 points! Be careful though, as it takes just one missed shot to break your multiplier, meaning you have to build it up again afterwards.

3. Watch out for the angry red things!

Yes, that’s what the game refers to them as. The moon will get pretty upset at you after you’ve shot him 5 times, causing him to spawn a little red blob that will bounce around the screen just like he does. Hitting one of these little rascals counts as missing, so you’ll lose a life if you have one; otherwise the game will outright be over. He does this every 5 shots, regardless of distance – hence why you should always aim for long shots – so be prepared. On the flip side, every time he does this he slows down a little bit, so that’s always good.

The amount of points you get from hitting the moon also scrolls the screen upward. At certain point thresholds, you’ll see a dotted line goal marker. Passing these goal lines will net you a heart, letting you miss one shot or hit a baddie and still be able to play. Also, if you’ve been landing double multiplier shots, sometimes you’ll earn a double goal, passing two lines with one shots. Getting this will destroy one of the angry red things on the screen, so it’s very helpful to get double goals!

Above all, take your time! Don’t rush! There is no time limit between shots, so aim true. It’s help to recognize the moon’s current trajectory, and to predict the angles he’s going to bounce at and where he’ll be in a couple of seconds, depending on his speed.

That should cover everything. Take your time, shoot ahead to correspond to the moon’s speed, and always aim for long shots! If you have any other questions or suggestions, leave a comment below. Until next time!