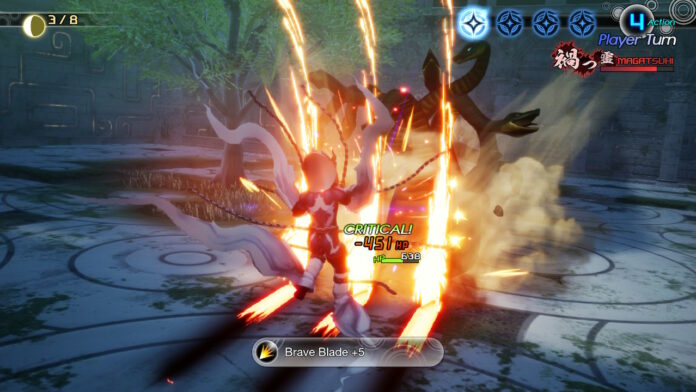 In Shin Megami Tensei V, you will be doing a lot of fighting as you explore the desolate world of Da’at and understand more of your role and your potential as the Nahobino. As such, it shouldn’t surprise anyone to see the game featuring a complex combat system with tons of different mechanics that make fighting demons both fun and challenging.

With so much time in Shin Megami Tensei V spent in combat, understanding how it works is extremely important not only to actually complete the game without getting frustrated by its high challenge level but also to have fun. Here’s everything you need to know about it.

Shin Megami Tensei V features the Press Turn combat system that has powered all entries in the series, including the Persona series, since Shin Megami Tensei III Nocturne. This system is a turn-based one where the player and the enemy take turns to issue commands to their characters.

Who goes first is determined by how the combat encounter is started. Enemies are all visible on the field, and you can get the advantage by attacking them from behind. On the other hand, if you are approached from behind, the enemy will get the first turn, which may spell doom, considering how hard even regular enemies hit.

Once combat is started, and it is your turn, you are able to use a variety of commands. Both the Nahobino and the demons in his party can use regular attacks, Skills divided into different categories that indicate their elemental affinity and general purpose (offensive, healing, or support), special Magatsuhi Skills, or try to escape. At the start of the game, the Nahobino is the only character that can use items until you learn the Knowledge of Tools Miracle, and he continues to be the only one that can talk with enemy demons to get them to join his party. All characters can also defend to reduce damage or pass their turn, which also results in an extra turn.

The Press Turn combat system is a highly-tactical combat system where you must learn to use the Weakness system to your advantage. Every character in the game comes with their own set of weaknesses and resistances, including the ability to void an attack entirely or reflect it back to the enemy. Attacking any character with an element against which they are weak will deal additional damage and add an extra turn, which is indicated in the upper right part of the screen with a glowing turn icon. Attacking them with an element that can resist, void or reflect will result in a turn getting lost. You can get a total of eight turns if you play your cards right, so putting together a balanced battle party that can cover all weaknesses is incredibly important, especially during boss battles. At the same time, you will need to pay attention to what types of attacks the enemy uses, as they will hit your weaknesses if they can without fail. Use the Essence Fusion mechanics to alter the Nahobino’s weaknesses and resistances to prevent him from getting hit repeatedly with skills he is weak against. If he reaches 0 HP, you will have been defeated, and you will have to start over from your last save, which could mean you losing tons of progress, as Shin Megami Tensei V does not feature an auto-save system.