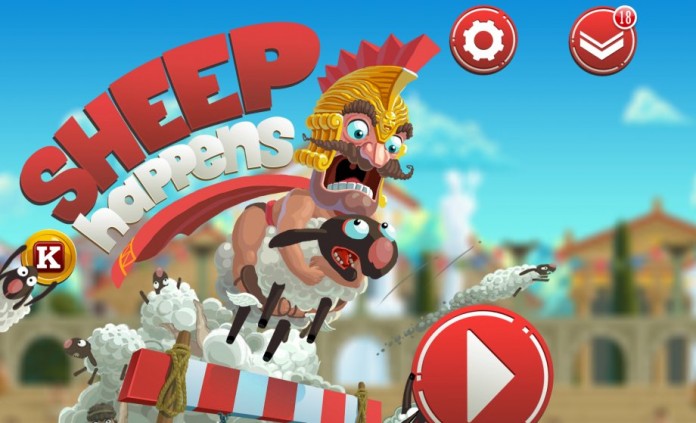 Sheep Happens is a really fun and challenging side scrolling endless runner game for the iPhone and iPad and I am sure you are having a pretty tough time getting farther and farther. In order to hopefully fix that, I am here to share with you a set of Sheep Happens cheats: tips and tricks for a longer run and for keeping your helmet on. And the cape. And the sheep.

Sheep Happens is by nature a game of skill so I can’t really help with that, but smart planning and investing in upgrades will surely help you get far. So here are my Sheep Happens tips and tricks:

Only keep an eye on obstacles
There are so many things happening on the screen that you might be tempted to look at the coins, jumping as high as possible to get them. But you should actually be looking at obstacles only and run in such a way that you always avoid them: many coins are placed in such a way that you will hit a fence and runners will sometimes trick you into thinking that you will get past a fence sooner than you actually will.

What boosts to upgrade first
The Shield is pretty cheap as a first upgrade and should be upgraded twice early in the game. So should the two Cape upgrades because longer gliding gives you more control over your runner. The others, like the extra lives and bull and especially the Hermes upgrades should be left for later on when you will really need them – for starters, you will most likely not even make it to Hermes for a long time.

Ignore the new Helmets
They might look really nice, but that’s all that they do. So don’t invest in helmets until you have the boosts upgraded, because those are the items that improve your game.

Don’t buy the extra life at the start of the game
…unless you really know that you will make it far. The extra life is always 200, while continues are more expensive, usually in the 300 coins range, but at least you will spend those only when you are about to hit a new high score. With the extra life, if you run into a bad series of obstacles, you will waste it no matter what and probably not even get your coins back. So it’s better to ignore that extra life as well for a long while.

Get on sheep
This should be your priority, together with getting the shield power-up whenever you see it: sheep basically give you an extra life, so you should always try to ride one and stay on it for as long as possible. You can’t glide when you are on a ship though, so have that in mind!

Don’t despair when losing your cape
Because you can get it back. Depending on the level of your boost, you will get it back sooner or later, but you can get it back after a while. The best way to increase your chances of getting there is to jump on a ship and stick to it for as long as possible. Either way, staying focused and not panicking when losing the cape is the right way to approach things.

Master the jumps and glides
Don’t forget: short taps have you jump lower, while longer taps will have you jump higher. Also master the gliding because it is what will generally help you get as far as possible.

For now, these are TTP’s Sheep Happens cheats. If you have other advice for fellow players, let us know by commenting below.