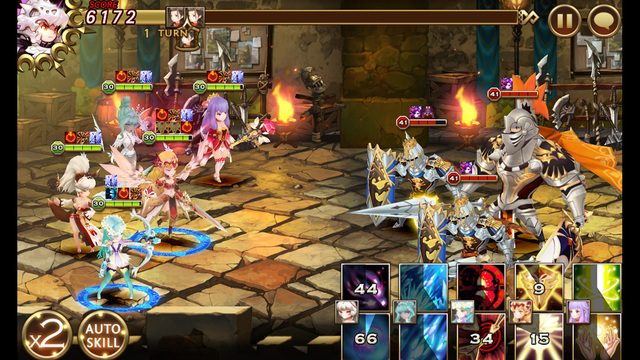 In Seven Knights, you’ll be following the story of Evan, a young warrior. What starts as another day quickly turns into a battle for all of Ladenberg, and Evan finds himself in the middle of a battle against the God of Destruction. Seven Knights is a team-based RPG where you’ll play as Evan and recruit various heroes to join your cause. Combine their powers and take down your enemies! It plays a lot like other games in this genre, so we’ll go over some universal tips with our Seven Knight cheats, tips and tricks strategy guide!

Like most team-based action RPGs, you have a set of quests to follow that will lead you to what you should be working on next. These quests also offer pretty good rewards, giving you more incentive to complete them. You can check your objectives at any time on the main menu, and you can also see what you’ll get for completing it. Be sure to always be working towards these!

2. Power up your heroes!

Also taking notes from other hero RPGs, in this game you can level up your heroes by sacrificing extra heroes! Sometimes when you complete a level, you’ll end up recruiting some monsters or other heroes. Usually their stats won’t be too great and the potential just isn’t there, so what do you do? Power up your favorite heroes! When powering up a hero of your choice, you must choose other heroes to sacrifice. Make sure you do this a lot as this is the main way of strengthening your team!

Each hero in the game has a type, such as offensive, defensive, support, and so forth. To get through the tougher fights in the game, you’re going to need a balanced team! You’ll need offensive types for damage, defensive types to soak up the damage, and support to heal everyone and make sure everything goes smoothly. If you have too many of one type, you might not be able to make it through! Check your hero types and make sure that you’re not stacking too many of the same type!

Formation is how your heroes will attack the enemies. The default formation is two spots in the frontline, and three slots in the backline. As a general rule, heroes that are in the frontline will be attacked by enemies more often. With this knowledge, try to position your heroes in a way that favors you. For example, placing defensive type heroes in the front will reduce the odds of your less durable heroes in the back getting attacked. There are three other formations you can check out. It’s also worth mentioning that each formation offers a passive stat boost to different spots. For example, the default basic formation give 1% more defense to those in the frontline. Experiment and see which one fits your team the best!

Aside from the main quests listed above, there are also daily, weekly, and monthly quests. Aim to do your daily quests first as they will rotate out once the day is over. They contain normal rewards such as keys, hero points, and gold. Weekly quests usually contain quests that have large amounts of gold as the rewards. Monthly quests are where it’s at – these quests usually offer 4 star and above heroes as rewards. Try to do as many of these as you can before time is up!

Your heroes can equip a weapon and a piece of armor. One catch though: once equipped, equipment cannot be removed without the cost of premium currency! Make sure to take a moment to think before you equip powerful gear. You can replace existing gear, but your older gear is destroyed upon removal. Instead, consider upgrading your gear. It works just like hero fusion.

That’s all for Seven Knights. If you have any other tips or tricks to share, leave a comment below!