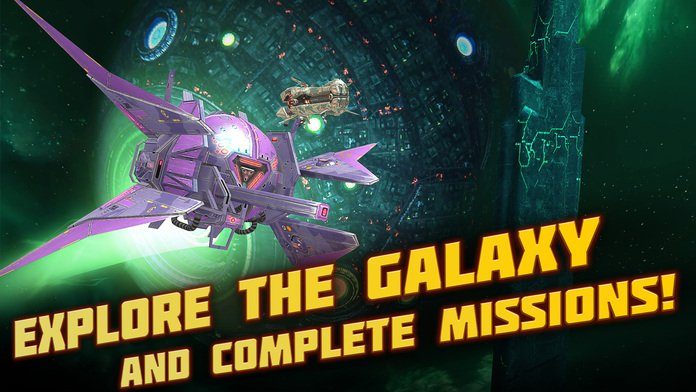 Star Conflict Heroes is a brand new strategy game for the iPhone and iPad. It puts you in the shoes of a fleet commander who has to defend the galaxy against evil doers, all while upgrading their fleet and discovering secrets the universe has to offer. A really good game, in other words and we’re here to try and help make your experience even better by sharing a bunch of SC Heroes cheats: tips and tricks for Star Conflict Heroes.

The game is one in which progress is slow and grinding is a must, but also one with hidden bonuses and goodies, but we’ll cover everything in today’s article. So let’s not waste any time and let’s check out below some SC Heroes tips and tricks!

1. Keep investing in Firmware Updates
Firmware points replenish for free as time passes and you should focus on improving the firmware of your ships as long as you have those points available. It’s true, the costs raise pretty fast and you will end up not using the ships you start your journey with, but in order to remain competitive and easily win battles, invest in Firmware upgrades on your starting ships – and new ones as well in order to be able to upgrade them fast and easy.

2. How to upgrade your ships
Early on, you can’t be very picky when it comes to upgrading ships simply because you won’t have a ton to choose from. So evenly upgrade your ships and try to have them all at the same level by grinding on easy missions, completing them over and over again for XP gains for new ships. Don’t use your XP points to increase the level of your ships yet – you’ll use them later, as your ships’ level get really high and grinding with new ships becomes boring.

Upgrade your ships evenly, but my suggestion is to focus on your Shield-type first because that’s the ship getting more damage. Then go to your favorite ship – a high damage dealing sniper or a mass damage inflicter and work your way up from there. Pretty soon you will have a bunch of ships and you won’t be able to keep them all upgraded to the maximum level, so pick your favorites (the best ships you have) and keep on upgrading them.

3. The ships you bring to battle matter
Both in the campaign as well as the Arena missions and other battles, you will face different types of ships. Although not completely game changers, different types of ships help you win battles faster or avoid losing them. So always look at the types of ships you are about to face and select your starting 4 based on that. Some missions that are more difficult than others also suggest the type of ships to bring into battle, as well as the strategy to use in battle so try to learn from those tips in order to understand what types of formations work best against your enemies.

But ultimately, it’s the sheer strength and level of your ship that matters. So if there’s a huge discrepancy between the levels of your ships, always bring to important battles those with the highest level.

4. Get your bonuses
There are all sorts of bonuses and goodies in the game. There’s a daily bonus that can be accessed from the Main Screen in Star Conflict Heroes (where you choose Arena, Campaign, Pirate battles and so on). On that same page, you get the Free Container drops every now and then so make sure you unlock those when the time is right. You can also double rewards for the missions in most cases by watching a video – which I recommend you to do.

Also, you should explore the Campaign map as there will sometimes be ships or other goodies around offering you free rewards.

5. How to win all battles
Most of the battles, once won, are easy to be won again without using any particular startegy. But for the more difficult and important battles, you should really pay attention to your strategy. Tapping the special attacks at the right time is something you should focus on. You should try to take out ships one by one, so focus your fire on a particular ship until it is destroyed.

The ship to take out in each mission varies and you shouldn’t always focus on the one with the highest health, on the contrary. The faster you take out ships, the sooner they’ll stop dealing damage, so take out the easy ones first and then focus all fire on the most difficult.

6. Keep grindind and playing previous missions
If you reach a point in the campaign where you can’t get past a specific mission, this means that you should focus on upgrading your fleet a little bit. Play older missions in order to gain experience points for your ships, but also to get upgrade materials as a reward for completing the missions.

Use all the items to boost the stats of your ships and return. This is a game where grinding is extremely important – so just tap the items you need, see where you can find them and go get them. Level up, get better and keep progressing. This is the only way to do it.

These are, for now, our SC Heroes tips and tricks. If you have other tips or tricks for fellow Star Conflict Heroes players, don’t hesitate to let us know by sharing a comment below.