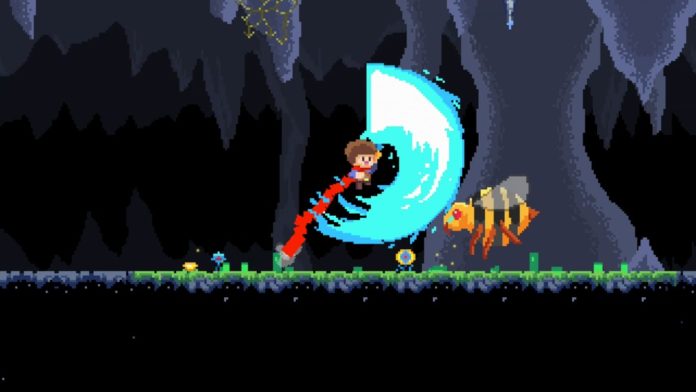 It was supposed to be a peaceful night, just a quiet walk between Jack and his lover Nara. But the villainous orc Korg had other plans that night. Ambushing them with immense speed, Korg kidnaps Nara and Jack rushes to her aid. He discovers Korg’s hidden underground base, where he meets an unlikely ally…

JackQuest is a action platforming game where players help Jack on his, well, quest to save Nara from the clutches of Korg. They will explore the underground labyrinth where Korg’s evil forces reside. Vicious enemies await, so dispatch of them with Jack’s newfound oversized sword ally.

Jack can find new power ups and gear as he descends deeper into the maze. Jack will eventually be able to use a variety of different weapons in addition to his main sword, including bows and other types of swords.

With special gear, he will be able to perform feats he was never capable of before. Jack will learn how to become acrobatic and wall jump, dash very fast, and even manipulate the power of wind!

Fans of action platformers and metroidvanias should not miss out on JackQuest when it launches on February 27. It will be available on the App Store for 4.99 USD.