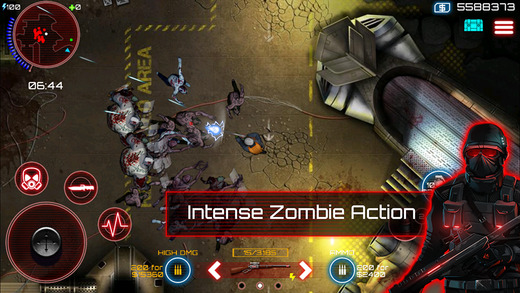 A virus outbreak (it’s always a virus, isn’t it?) on a trans-federation planet turns horrors into reality. Gear up and get ready to blast some zombies! SAS: Zombie Assault 4 is a twin-stick shooter that pits you in the shoes as one of the SAS Special Forces, an elite squadron with a variety of skills. Blast some creepy crawlies, and grab some awesome loot! Get ready to fight off the undead with our SAS: Zombie Assault 4 cheats, tips and tricks strategy guide.

1. Choose the class that fits your playstyle!

There are three classes to choose from when you’re creating your SAS soldier.

Sometimes, equipment you find will have augment slots on them. You can add special bonuses to your equipment through these augment slots. For example, armor can be fitted with general defense protection, or heat or toxic resistance, and so forth. Weapons can be fitted with offensive bonuses, such as increased damage. If you manage to find a piece of equipment that has slots, augment it!

3. Create your own barricades!

Usually, there are a bunch of boxes lying around the levels. If you run into these boxes, you can actually push them around! This is great if you move these to chokepoints, as it’ll buy you some time and cover to fend off the horde. For example, on the very first level, “Onslaught,” there are two gates. The enemies spawn behind the gates, but they have to break them down in order to get to you. If you push the boxes in front of the gates, they’ll have two obstacles to get through!

If you notice your clip is low, be sure to manually reload before a fire fight starts! Don’t get caught in the middle of the battle with an empty clip!

5. Don’t forget about the SAS skills!

Regardless of whatever class you pick, you also have access to the general SAS skills. These skills give you basic stat boosts, such as increased health, defense, attack power, movement speed, etc. Try to pick the skills that work in tandem with your class specific skills. For example, I played as a Medic most of the time, so I got the increased energy regeneration skill. This helped me put down more med packs, keeping my team nice and healthy.

Keep still is a quick way to lose a lot of health. In this game, moving around a lot is key. Most of the enemies are melee attackers, which means they need to get up close and personal in order to any damage to you. Backpedal and firing is a good way to pick off big hordes of enemies.

7. Watch for the blue arrow on the minimap!

It’s a bit tiny so you might miss it at first, but there’s a blue arrow on your minimap at the top left. If you follow this arrow, it’ll point you to your next objective. If you’re lost at any time, just refer to the arrow!

Now get out there and blast the undead, but most importantly, survive! If you have any other questions or suggestions, leave a comment below!