Home Guides Sandship Guide: Tips & Cheats to Get the Most Out of the...

If you’re looking for some Sandship tips and tricks, in today’s article we’re covering Rockbite Games’ latest title and helping you learn how things work in the factory itself.

The full name of the game is still a mystery for us: when you launch it, the screen shows “Sandship: The Last Engineer” but on Google Play, it’s “Sandship: Crafting Factory”.

But despite this little hiccup, the game itself is truly amazing and by far one of the best idle games that I have ever played: it is challenging, it’s smart, it has a great atmosphere and, surprisingly, an amazing story too!

So let’s see how to master this really difficult game by checking out below some tips and tricks for Sandship: The Last Engineer.

Read the info about each device

I spent a billion years (give or take a few years) trying to figure out how to produce Iron Wire early on. I was on the point of giving up, when I decided to actually go through the list of buildings once more and read the details.

You do so by tapping the small “i” button next to the image itself and that will help a lot. This is how I realized that, in order to produce my Iron Wire, I need to heat the metal once more. Things were easy afterwards.

So make sure to read the details of each device in the factory, as well as read about the materials you’re trying to produce. This is serious business here and guessing won’t always get you to the end. And definitely it won’t happen fast!

Space optimization is the biggest challenge

Early on, even with the relatively limited space of your first factory, you still have enough to produce everything you need to progress. But soon, you will end up realizing that if you want to get the most out of the game, you need to optimize space as much as possible.

This basically means that you should have no wasted slots in your factory: everything should be used to do something, even if that only means hosting a conveyor belt or anything.

You can’t afford to have empty spaces in your factory and you should also prepare to re-purpose some of the production lines in order to meet your demands and produce the items required.

Because, yes, eventually you will end up in a spot where you will simply have too little space for everything you need!

Try to produce all items that you can

Hoarding is the way to go in Sandship: The Last Engineer because you never know when you will need even the most basic of the items you can produce in the game.

As a result, your best bet would be that of doing your best to produce all the items that can be produced – and do so at all times.

The problem is the time needed to make items. Early on, everything is crafted really fast, but as you progress through the game, all items need more and more time to be made, meaning that you get fewer and fewer each minute.

This further means that you might reach a point where you will have to prioritize and create more lines that produce the more advanced items, just in order to keep up with the demand.

Sandship: The Last Engineer is a game where micromanaging everything is extremely important, with you always needing to decide which items you should focus on and produce more of.

How to get rid of unwanted items

Inevitably, you will end up reaching your capacity and won’t be able to produce more items because you won’t have a place to store them. This is when you have to simply throw away the excess products.

Ideally, you wouldn’t end up in a situation like this: production has to be smooth and you always should be making just the items that you need.

But I persoanlly found it really difficult to do so and I prefer, instead, to produce as much of everything as possible and just throw away what I don’t need when I want to make room for other items.

Whenever you’re throwing away items you have crafted, make sure that you get rid of the items that are the easiest to make (so for example if you’re crafting basic iron ore, which is the fastest to make, then throw that one out first).

But how to get rid of any item? Simply go to the view of your sandship (usually by tapping the top left, arrow-shaped icon) and once there, drag the resource you want to destroy from the claimed resources in your inventory anywhere on the ground.

Once you do this, a new window will pop up asking how much do you want to destroy/throw away. Good riddance!

Your main goal in the game is not collecting resources or building your factory/sandship up, but completing contracts.

Doing this will reward you with Crates that have more or fewer items that you need to progress through the game, mainly complete new researches that unlock new things.

So make it your main goal to complete the contracts and do so as often as possible: this is the way to go and the best approach if you want to have enough of those rare resources for everything.

The problem with the contracts is that you can only work on one at a time – if that’s the case, always work on the ones that give you a crate the fastest and leave the ones that take longer to be done when you’re not actively playing the game.

Of course, you need the ones that give you the rarest items because those are the most valuable, but even common crates can be good if you keep on getting them from quick contracts.

Focus on completing the missions

Contracts go hand in hand with your quests. These are what drive the story forward and they are your end goal.

Quests or missions are usually completed simply from being active in the game – and involve completing contracts like crazy, but make sure to check them out every now and then just to know what exactly is expected of you.

Build up your Sandship (and subsequent factories)

An interesting thing that I wasn’t actually aware of early on is that on your sandship, you can place various extra buildings which represent mini factories. You can go inside each of these buildings and work on production lines there.

So you have the Long Factory – which is the one you start with, then the Micro Factory that the tutorial sees you build and afterwards you can build even more.

But make sure that you go inside all factories (buildings on your sandship) and create new lines there as well.

For a while, I only worked with the long factory and progress was starting to be really slow, as you can imagine. It was a real joy to find out that I can go inside the other buildings as well.

The buildings themselves can be upgraded if you tap them on the Sandship view and leveling them up allows you to buy more space inside, which in turn allows you to produce more. So make sure that you’re always working on leveling up your buildings outside – because these too can only be improved one at a time.

This game is absolutely insane with the amount of items it lets you produce! This makes it extremely challenging and even more fun. But you do have to micromanage in order to make sure that you get everything done as fast as possible and you don’t get left behind!

Progression is very linear in Sandship: Crafting Factory. Except for the contracts that require all sorts of items to be completed, everything else in the game will need the most advanced items you have unlocked in order for you to move forward.

The easiest way to do so is to have your production lines built with that in mind: place the various production devices on the lines as close as possible (so that they still work). Whenever you need a different itme produced, simply remove some of the devices or add more on the line in order to switch production.

If you don’t do this, you will end up having to constantly destroy and rebuild entire lines, which is extremely time consuming.

Resources are not yours until you claim them, so make it a habit to log back into the gme often in order to do so. Otherwise your resource production will be halted and progress much slower.

Get a puzzle room to better understand the game’s mechanics

Soon after starting the game, you will unlock the puzzle room for your Sandship. I recommend getting that built ASAP. Then, start solving those puzzles: they help you better understand the game’s mechanics and how each device really works.

It doesn’t give you much in terms of rewards and it does take up some valuable space on your sandship, that is true, but it is vital when it comes to understanding the intricate mechanics behind the game and help you better plan your strategy in the long term for playing a perfect game!

These would be our tips and tricks for Sandship by Rockbite Games, aka Sandship: Crafting Factory, aka Sandship: The Last Engineer. (We’re just calling it Sandship, because it’s shorter anyway).

If you have additional questions or, even better, extra tips to share with fellow players, don’t hesitate to let us all know by sharing your comments below! 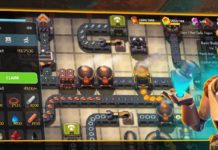 Sandship, the Crafting Factory Game, Coming to iOS, Android in May