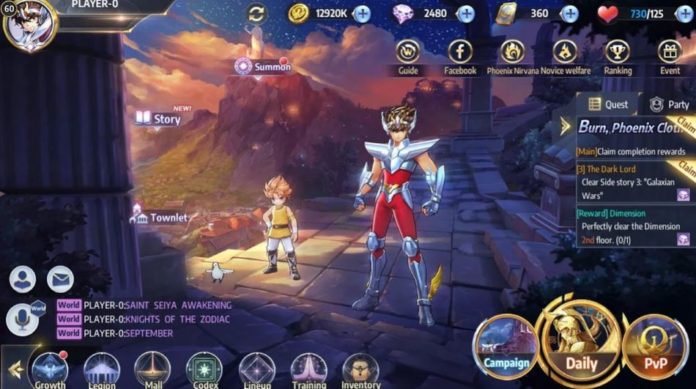 In today’s article we are going to cover all of the Saint Seiya Awakening: Knights of the Zodiac tips and cheats to help you become stronger in the game!

In this game you will have a wide array of skills to use and an even bigger set of features that you need to keep track of, so if you want to get better at the game, let me help you out a little! You came here for all of the Saint Seiya Awakening: Knights of the Zodiac tips to get stronger, so let us give you exactly that!

So, without further introductions, let’s dive right into the Saint Seiya Awakening: Knights of the Zodiac tips and tricks right here below!

As soon as you are starting off in the game you should follow the quests because that way you will unlock a lot of the game’s content and progress slowly, unveiling the captivating story.

Now if you watched the anime, you will know that the game has certain elements, but the most important feature is that you can do anything that you want to make it your own. It’s better to start following the quests that appear in the right side of the screen, because that way you are progressing at the perfect pace.

Make sure that you follow the Main Storyline, because there you will have everything that you need in order to level up your profile: battles, dialogues and some other easy tasks which will help you get experience really fast.

Every choice that you make, be it a battle or a dialogue, will cost Stamina (the red hearts you see in the top right side of your screen) and that will be the way that you progress further. These will replenish over time, or you can claim them by completing certain tasks in game.

Level up to unlock more Saint slots and deploy the heroes!

At the very beginning of the game you will have only four Saints on your lineup team, but as you level up you will unlock two more: one at level 13 and the last one at level 18. Now what you might want to know is that you cannot really control which order the characters will attack in, because this is proportional to their speed.

How to choose the characters you deploy:

– When you want to deploy your heroes, make sure you check their tier, and prioritize high tier heroes (focus on A and S tier, because they are way easier to obtain, but if you are lucky to get SS, then deploy that for sure!)

– You can check the characters’ stats by tapping on the characters, and then selecting the “i” icon, a.k.a. the “info” option. There you can see the attack, defense and speed that the character has and decide if you want to deploy it or not.

– You can make up to four lineups and have them saved, so you can use a different one depending on what game content you want to do!

– I would suggest first upgrading the higher tier characters that you get, and then deploying them, because that way you will see their actual power once leveled up and upgraded compared to the others.

You can upgrade your characters by heading on to the “Growth” menu in the main interface of the game. There you can see your cards with Saints on the right side of the screen, and at start you will be able to level them all up to level 20.

All that you need to level up a hero is Saint EXP Potion. You will get these as rewards from completing the game’s quests and other game dungeons, so it’s really easy to collect a lot and upgrade your heroes.

I suggest that as soon as you have completed a few in game quests you go on ahead and upgrade your best characters to level 20. This will be super useful, even if you haven’t unlocked the Rebirth option yet, because once you unlock that, you can then star up the heroes to unlock more levels!

You can choose to “Rebirth” your heroes, which is basically increasing their stars. As your heroes will first be 2 stars as you get them, you can only level them up to level 20 maximum then.

Once a character reached level 20, you can add two 2-star Saints as material to make your character 3 stars! This will increase the maximum level you can upgrade that character to 40, and make it more powerful.

To upgrade a character to 4 stars, you will need to have the said character upgraded to level 40, and you will need to add three 3-star Saints as materials! This is pretty much how it goes, so make sure that you summon a lot of them – you’ll need it!

The Saints will each have special connections with other Saints, which will enable extra stats once they are all deployed together on the same team. Make sure you check out these saint Links, because they are pretty useful!

For example, some of these stats and skills are extremely useful and will make a big difference for the team, so I definitely suggest that you head on to the Growth -> tap on the Saint you want to check out -> Enhance -> Link (on the left side of the screen, bottom).

It’s better to deploy Saints that have certain links, because they will be way better than having just random Saints on your team.

During the battles, you will be able to attack the enemies automatically or manually. By selecting the Auto battle, your heroes will use the skills they want or the ones that you select, but sometimes it’s really not ideal.

In certain situations it’s much better to manually fight, because that way you are using the exact skill that you need at the time you want, and not wasting any skills. You will have certain energy points on the right top side of the screen in battle, and each character skill will use up a couple of them!

They refill each round, so if you have run out of energy after the first or second character skill, you can’t use any skills with the other Saint that turn, until the energy refreshes in the next run.

Make sure you select wisely which skills to use – for example, if you have a character using AoE skills (area of effect, attack which affects multiple enemies) and you have more enemies to take down, you might want to use that first to try and take them all down at once!

If you have characters dealing single target attacks only, then you should focus on taking them enemies down one by one, so that you will not take a lot of damage.

So make sure that you focus on taking out the enemies one by one, one after the other! That way, even if they attack you, if one of them died it’s better because that one will not deal damage (obviously), so you will survive for longer. This works better in the late game, when the enemies will have skills which deal quiiiite a lot of damage and you want to survive for longer.

In order to summon more characters, you need to have either Advanced Gems or Common Gems.

– The Common Gems will give you any Saint between C and A tier, and this is good for summoning Saints for combining into your main Saints to “Rebirth” them – star them up. Buying Common Gems costs 25 Diamonds, so when you want to choose Rebirth for a hero, buy a few Common Gems and make the upgrades!

– The Advanced Gems will give you any Saint between B and S tier, and this is where you should firstly spend your Diamonds. You can get very good Saints from this, and if you want to put together a good team, invest your Diamonds into this at start. One Advanced Gem costs 100 Diamonds, so you can purchase them every day multiple times, after completing a few quests to claim the Diamonds given as rewards.

I suggest that as soon as you start playing, you spend your Diamonds for summoning a few heroes, because if you are lucky enough to get a few good ones which can be linked (see details about this above) then you’re pretty much set for now!

I was lucky to get Pisces Aphrodite, which I will look to pair with Cancer Deathmask, because they will gain the Assist and a few extra stats, and that’s how I am looking to build my team.

Want to get good rewards? Do this!

If you are looking to claim a ton of good rewards early on, you can choose to complete the tasks given to you at the very beginning, in the “Novice welfare” menu. This menu can be found in the main interface, and there you will see a few tabs with various tasks.

Make sure that you check them out because they are time limited, and they each give a lot of Diamonds and other rewards, so I definitely suggest checking them out. Here you can also find the daily login rewards, which are given to you every single day for simply logging in to the game!

Log in every day to claim these, even if you don’t really plan on playing the game that particular day, because they will come in handy at a later time when you do decide to play – but then again, why wouldn’t you play?

One of my favorite sections here is the Beginner Discount Pack (in the “Discount Pack” menu, bottom of the list) because there you can see various items on sale for low amounts of Diamonds. Check these out and if you see something that you like, just use a couple of Diamonds to purchase them! However, pay more attention to the 50% discounts rather than the 20% and such, because those might not be worth investing in.

You can also check out the offers in the Mall, but I really suggest saving up the Diamonds for when they go on sale – otherwise, buy them only if you need them!

Want to play with voices?

If you want to play and have the ultimate experience, then you should definitely download the voice pack for the characters, so that you can give them some life! To do this, tap on your profile icon in the top left corner of the screen, and then tap on the “Download Voice” option. This might take a while, but if you have the time, then it’s worth waiting it out!

For more details, you can check out our gameplay video right here: 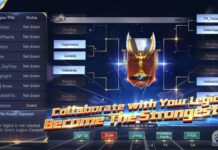 Saint Seiya Awakening: Knights of the Zodiac: How to Summon Gold Saints? 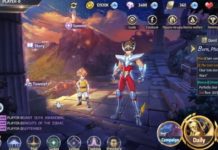 Saint Seiya Awakening: Knights of the Zodiac: Best Saints in the Game 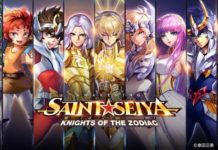