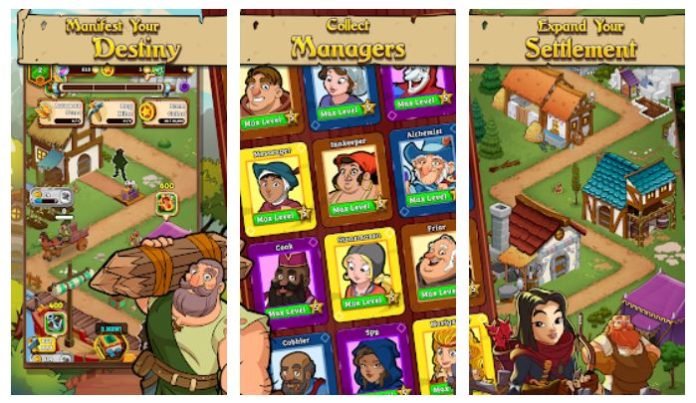 This is that type of a game where you start over again and again, with the beginnings always difficult, only to turn into a relative routine which, strangely, somehow remains entertaining at all times.

Since your main goal here is to unlock all towns and get as far as possible, let’s see what can you do to achieve this: check out our Royal Idle: Medieval Quest tips and tricks below!

Keep an eye on the ship & collector numbers

Probably the biggest challenge in the game is micromanaging resource production and trading. If you manage to do this right, you optimize your coin spending and progress through the game as fast as possible. Of course, this is easier said than done.

The main things you will have to keep an eye on are the Ship (how many goods it can carry for one sale) and the cart collecting the goods from the building.

But things don’t stop here! You will have to mix these two matching numbers with all the buildings that produce goods: ideally, you will produce exactly as much as your cart can carry and your ship can sell.

However, in the case of the buildings, it isn’t the biggest problem if you produce more – but never less! If you produce more, a few cart and ship upgrades will fix the problem, eventually.

But keeping all things equal helps you keep the cash flow at ideal rates and make the best profits possible to be able to complete the missions ASAP and unlock the next village.

Having to tap each building in order to collect the goods is no fun, and this is why you have to buy the villagers that do this for you ASAP.

This come in naturally as you play the game, but after restarting / heading to a new town, make sure that you have a few minutes to purcahse the basic automators: the ship captain and the Royal camp lady, as well as at least the farmer and the miner.

With them in place, you have a mini system going and you can return a bit later to get more upgrades and unlock new buildings with their accompanying automators.

Upgrade to the milestones

Like in most idle games, reaching a certain level milestone with an upgrade gives you a massive boost. These usually happen when you reach level 10, 25, 50, 100 and so on.

Make it your goal to upgrade to reach these milestones in order to get the massive bonus, starting with the lower side of the map (the cheaper structures) at first, then reversing (starting from the top to bottom) when you are somewhat advanced in a town.

You don’t only need to produce a lot of resources (or have a large carry/sell capacity) but you also need as many upgrade levels as possible, sine most of the town missions that you need to complete will require you to buy a certain number of upgrades. And the lower buildings are the cheapest!

Upgrading to a milestone also rewards you with Elixir, which is a really important resource in the game, since that is used to improve your existing cards.

Focus on the easiest quests first

Even though each town has multiple quests for you to complete before moving to a new one, you only have 3 active at a time.

Focusing on the easiest to complete at first not only helps you progress faster with the rewards that you earn, but also unlocks the next quests so you can keep em coming.

Don’t rush to upgrade all your villager cards

Even though you might consider it the first thing you need to do, it actually isn’t! Upgrading your villager cards is extremely useful because this increases the numbers for the building they are assigned to, but you should be patient.

I am saying this because, first and most importantly, you will have missions in some towns that will require you to level up a certain number of cards. If you already have them maxed out, it will be a really difficult quest to complete.

I am not 100% sure that this is the case, but it seems to be: early on in the game, I unlocked two villagers for the Quarry: the Quarryman (automation) and the Potter. I rushed to level up the Potter to 2 stars, while my Quarryman was at 1 star.

Surprise, though: when I moved over to a new city, I wasn’t able to assign my Quarryman and automate the Quarry until I leveled up the automator as well.

Take advantage of the special offers across the river

It took me a while to see that at the South of the boat, there is a small stretch of land where some glowing characters appear from time to time, with special treats for you.

There, you have the option to watch an ad for some free Elixir, but you also get that Fairy lady that comes with a special offer: trade some cards for some Elixir. I didn’t really see a good offer from her yet, but it doesn’t hurt to constantly check the area out.

Double your earnings by watching ads

One of the best things that you can do to make your Royal Idle: Medieval Quest progress bar fill up faster is to double your earnings by watching an ad. Take advantage of the offer in the bottom right corner, which allows you to watch avideo ad and double everything in the game for the next 4 hours.

You can also watch video ads to increase your ofline earnings, which is something I highly recommend you to do, especially after returning to the game following a longer break (at least a few hours).

Buy villager cards from the shop

I’m always running out of Elixir in the game, but if you happen to have more than you know what to do with, you can spend it in the in-game shop buying Villager cards.

This is a great way for you to get enough cards for a new upgrade, but do have in mind that the prices for those cards are pretty high and each new purchase you make increases the price of the card you’re buying.

But it’s still worth keeping an eye on the shop and see if they restock with some cards you really need!

Royal Idle: Medieval Quest is a game that doesn’t require you to actively play it in long sessions, especially after you’ve got your initial setup running and the automators in place.

It’s still worth logging in at least a few times per day, every few hours, in order to collect the income and purchase some upgrades, in order to progress faster.

These would be our Royal Idle: Medieval Quest tips and tricks. If you know other strategies that work well and help you progress faster, don’t hesitate to share them with us in the comment section below.