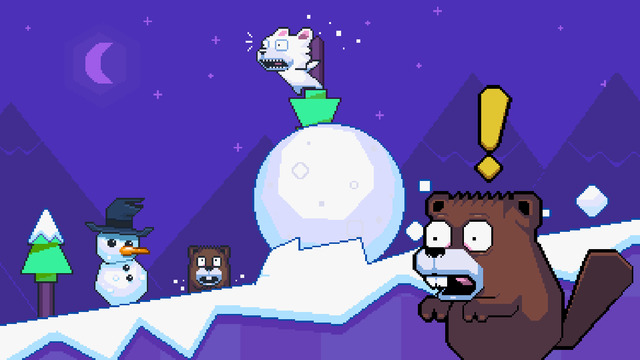 Some polar bear got the bright idea to ride a giant snowball down a perilous mountain. Nothing could go wrong, right? Well, at least with your help! Roller Polar is a one-touch simple action game that tests your timing and dexterity. Watch out for the obstacles as you lead this crazy polar bear to victory! We’ll help you out with our Roller Polar cheats, tips and tricks strategy guide.

Between you and freedom lies plenty of obstacles!

2. Try to balance between looking ahead and watching the snowball!

So you may or may have not noticed this but the obstacles come in sets. Once a set is complete, you’ll notice that there is a slight pause in between the next set of obstacles. What you want to do is try to keep your eyes shifting from the left side of the screen to the right side. Watch the left side so you know what’s coming up, and watch the right side so that you can see what’s about to roll up the snowball.

3. Plan out your jumps, you might not get a second chance!

Some sets of obstacles are laid out in a fashion where you’ll need to pass over the entire thing in one jump. If you mistime it beforehand, you’re not going to get a second chance! Be careful! Think carefully and quickly, then jump!!

Much like any other endless runner game, you need to really practice to get those high scores. Take a break if you need to, as these kind of games can get exhausting! It’ll throw off your reflexes, so come back later.

Keep trying and you’ll get it down. Most importantly, have fun! If you have any other questions or suggestions, leave a comment below!