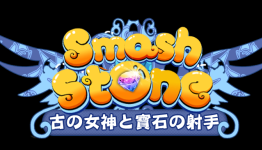 Smash Stone is a really unique take of the role playing games/ puzzle formula that’s been quite popular in the past few months. Instead of combining role playing game elements with match-3 puzzle games features, Smash Stone combines the role playing game features with a gameplay experience inspired by Puzzle Bobble and similar games, as players will have to match three or more colored spheres to remove them from the game, score points and damage their opponents.

Smash Stone is also going to be packed with content, as players will have the chance to fight against 300 goddesses and even collect them as cards. It will also be possible to get cards representing other players by playing online against other gamers, expanding the experience of the game.

Smash Stone will be released on the App Store on a yet to be confirmed release date. The team confirmed that their new game will be released soon and we will let you know precisely when as soon as more comes in on the matter so stay tuned for all the latest news.