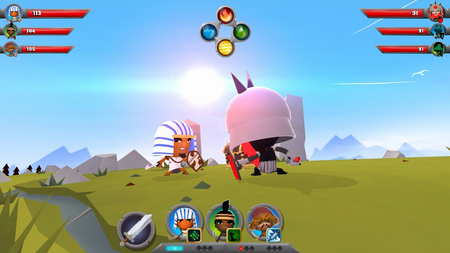 World of Warriors is a really unique game combining features taken from different genres. The game still sports some casual games features, like time managment and more, but also adds on top an engaging battle system and some role playing game features.

In World of Warriors, players will be fighting other warriors in an action battle system where it’s really important to press the right button at the right time to attack, heal, restore mana and more. Players are also able to bring more than a single warrior in battle, making the game almost feel like Pokèmon, especially considering it’s possible to improve your warriors and even evolve them into more powerful ones.

The colorful cartoonish presentation of World of Warriors is definitely one of the game’s better features. All the warriors are incredibly detailed, with their outfits and weapons being a faithful representation of the real-life warriors they represent.

World of Warriors is now available for download on the App Store. Being a free to play title, it includes wait times, an energy system and plenty of IAPs.