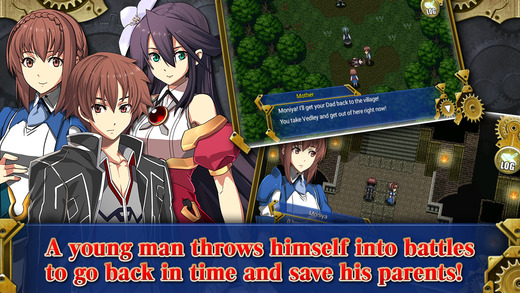 A new role playing game developed by Kemco has been made available on the App Store a few hours ago.

Grace of Letoile is the latest role playing game developed by Kemco, featuring a really interesting premise. In the game, players will take on the role of Vedley, a young man who makes a pact with some mysterious dolls that have the power to control time to bring back his parents to life. The dolls, called Letoiles, don’t grant wishes to anybody but only to those who can win their core. This means that Vedley and his companions will have to travel all over the world to get his wish granted.

Being a Japanaese role playing game influenced by classic 16-bit games, Grace of Letoile features a rather simple turn based battle system. Adding a little more depth to the system is the Chronos Gauge, which allow players to unleash some powerful attacks.

Grace of Letoile is now available for purchase on the App Store. The game is currently available for a reduced price, $3.99, and it will be like this until next week, when the price will raise to $7.99 so make sure to take advantage of this launch week deal if you’re interested in the game.