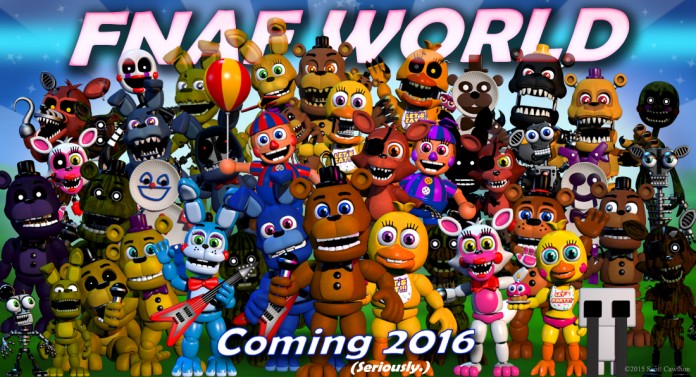 Not too long ago fans of the Five Nights At Freddy’s franchise have been surprised by the announcement of a new entry of the series. The upcoming game will be quite different from the rest of the series, as it will be a role playing game featuring a variety of characters from the Five Nights At Freddy’s games. A release date for the game has yet to be confirmed but we have recently learned that the game is not going to be released this year.

The FNAF World official website has been recently updated with a new image which has revealed that the game is going to be released during 2016. The release dates for previous entries of the series have been changed before but it seems like the 2016 release date for FNAF World is really set in stone.

Earlier this month series creator Scott Cawthon revealed that he hoped to have a demo of FNAF World out by Halloween. Unfortunately this won’t be happening due to the game being much bigger than the rest of the series so fans will have to wait a bit longer before being able to try it.

FNAF World will be released sometime during 2016 on the App Store. We will keep you updated on the game’s release date as soon as more comes in on it so stay tuned for all the latest news.