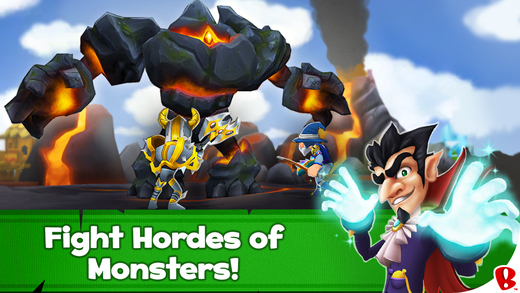 Role playing games are usually complicated games that require a bit of effort to understand all of their gameplay mechanics. Luckily for all those not willing to spend hours upon hours with a game that’s hard to understand, there are some easier RPGs that are easier to understand but not less fun.

This is pretty much what Epic Island is, a casual role playing game developed by Backflip Studios. Unlike what the title might suggest, the game is a really light-hearted role playing game that everyone can enjoy.

The gameplay experience of Epic Island is pretty easy to understand. Players will have to assemble parties by choosing different characters and send them on timed quests to kill monsters, obtain items and much more. Materials and gold obtained can be used to forge new weapons and equipment and more.

Epic Island also includes an interesting online multiplayer mode, where players can fight others in the arena. It’s also possible to join factions and earn some nice weekly rewards.

Everything considered, Epic Island looks like the perfect game to get into role playing games, as its gameplay mechanics are really simple to grasp.

Epic Island is now available for free on the App Store.