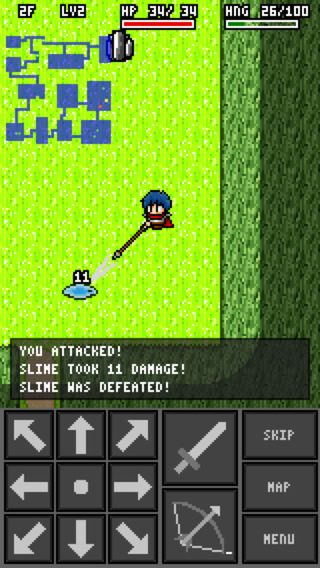 A new roguelike game has been released a few hours ago on the App Store, a game sporting an old school inspired gameplay experience that fans of the genre will surely enjoy.

The new game is called Alchemic Dungeons and it’s been developed by Q-Cumber Factory, the team behind the Rogue Ninja games and a few other titles.

Alchemic Dungeons comes with all those features that fans of roguelike games expect to find in their games such as a variety of dungeons to explore, traps to avoid, enemies to fight and defeat, weapons to craft and more. The game isn’t exactly a game that will change roguelike titles forever, but it seems to be quite solid.

As stated above, Alchemic Dungeons is heavily inspired by old school games, especially in its presentation. The game sports a colorful 8-bit graphical style as well as a catchy soundtrack that will make your dungeon exploration more pleasant.

Alchemic Dungeons is now availabl for purchase on the App Store. The game is currently available for the low pirce of $0.99 to celebrate its release. The price will soon turn into the full $2.99 one so make sure to take advantage of this deal as soon as possible if you’re a fan of roguelike games.