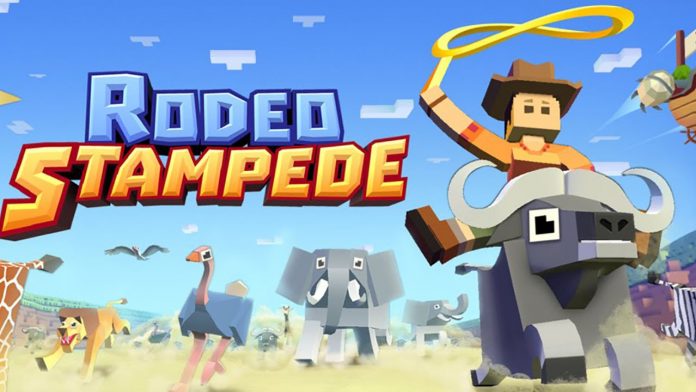 Watch out critters of the Savannah – there’s a new wrangler in town! Rodeo Stampede is a one touch endless runner with an animal twist. Wrangle in an animal with your lasso to ride ’em, but watch out! They’ll get angry after a while and try to buck you off! Keep your momentum and lasso to another animal and see how far you can get! Each animal you ride can also be transported to the Sky Zoo Safari, an awesome zoo located way up high! Let’s get your zoo started with our Rodeo Stampede cheats, tips and tricks strategy guide!

1. Keep hopping from animal to animal!

Unless you’re really attached to your current animal, it’s generally better to keep hopping between animals. Staying on one animal for too long will cause it to enrage, making it hop around erratically in an effort to throw you off. You can tell when it’s about to happen by the flashing red exclamation mark next to the animal you’re riding. Be warned! Some of the bigger animals, like the elephant, will immediately toss you off if they’re enraged.

2. Try out the ostrich for a speed run!

Once you unlock the second area of the Savannah, you’ll start to encounter Ostriches. These guys are speedy! Unlike the other animals, when an ostrich enrages, the effects aren’t apparent at first. Once enraged, the ostrich you’re riding will slowly begin to speed up. Its maximum speed reaches outrageous levels and soon you’ll be holding on for dear life. However, if you can manage it and handle the speed, you’ll eventually be moving at ludicrous speeds!! This is great for going the distance!

3. Level up your habitats!

Levelling up the habitats in your zoo not only generates you more revenue, but you also gain additional benefits for that corresponding animal! For example, the level 2 upgrade for the Zebra habitat makes Zebra bucks push away nearby animals during a run. There are lot of other beneficial effects, and they’re all unique for each type of animal. Make sure to read them all so you know how to take advantage of them!

When you’re in the zoo, selecting a habitat will show you a “Ride” button. If you press this button, you’ll begin your runs riding that animal. This is helpful if you have a specific habitat upgraded a lot or you just need a different type of animal’s power.

5. Complete the missions and break the boxes!

Aside from the hourly cruises, completing the missions is your main method of earning coins. They will ask you to do things like ride different types of animals in one run, go a certain distance, and so forth. Additionally, sometimes during a run you’ll see a wooden crate lying around. If you run into it you can collect the goodies inside, usually coins.

6. Jump from animal to animal!

During a run, once you get really far – maybe somewhere around the 1000m mark – you’ll start encountering tightly packed herds. Maneuvering in and out of them is a bit tricky, so you might want to just skip ahead. Jump from animal to animal to bypass choke points; don’t risk clipping a nearby animal!

That’s all for Rodeo Stampede. If you have any other tips or tricks to share, leave a comment below!