Home Game Guides Rocket League Sideswipe General Guide: Tips and Cheats on How to Get... 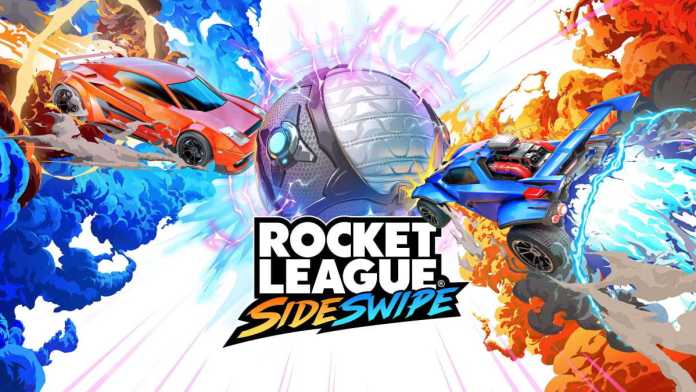 Before you do anything, you should get familiar with the basic controls of Rocket League Sideswipe and have a general feel for the game’s physics. Go into training mode and practice boosting around the field and flying around to familiarize yourself.

Your car has three basic functions: movement, jumping, and boosting. You can drive around to knock the ball around with precision control, or you can jump and take to the air. You can also boost into the ball to hit it harder.

Jumping is probably your most important move. You may have noticed that the goals in Rocket League Sideswipe are not on the ground – instead, they’re stationed midair. The best and most efficient way to score is to pop the ball into the air and send it flying into the goal.

Lastly, you have your boost, which will rocket you forward. On the ground, you can boost to get lots of speed, and in the air you can use it to essentially fly around. Your boost fuel will recharge only when you’re on the ground, so you have a limited amount of time you can stay midair.

Related | How to Get Infinite Boost in Rocket League Sideswipe

You can propel your car upward by hitting the jump button, and the longer you hold it, the higher you go. If you tap jump again, you’ll double jump and get extra height. If you hold a direction before you hit the jump button the second time, you’ll perform a flip in that direction. Flips are useful for changing your direction on a dime and adding some extra power to your ball hits.

You can also perform boost jumps, which are done by boosting and jumping at the same time. You can tap both buttons at the same time to do it, or you can enable a dedicated boost jump button in the control options. We recommend the latter option as it gives you more control and easier timing, not to mention it gets you off the ground very quickly.

The dedicated boost jump button gets you into the air very fast – all you need to do is point your car upwards and then lift off. Once you’re in the air, you can use the regular boost button to avoid accidentally using your double jump or flip. Boosting in the air can be kind of tricky at first, but practice, and you’ll get the hang of it.

Boosting in the air is crucial as it’s the main method of air dribbling the ball. Once you lift the ball into the air, boost jump off the ground to get into the air quickly. Then, use your remaining fuel to keep bouncing the ball towards your opponent’s goal.

Double-tap and hold any direction on the virtual joystick and your car will begin rolling in that direction, provided you’re currently in the air. At first glance, this technique seems to be just for fun, but upon further examination, it has some practical uses!

For starters, Air Rolling gives you tighter control over your aerial maneuvering. Your movements in the air are a tiny bit more precise when Air Rolling, so it can help you be more accurate with your shots.

Air Rolling also serves as visual confusion to throw off your opponents. When you’re spinning through the air, it’s kind of hard to tell what you’re going to do next, which can make opponents guess incorrectly!

Related | How to Spin in Rocket League Sideswipe Guide

New to Rocket League Sideswipe are special shots, or “Flicks”. Flicks are performed by hitting the ball in a specific way, which will cause the ball to glow a certain color. Flicks have more power to them than regular shots, so utilizing them when possible can be very helpful!

The first Flick and the one you’ll probably do the most by accident is the Critical Shot, or blue shot. Critical Shots are performed by doing a flip and then hitting the ball with the nose of your car. Critical Shots have the most power to them, so you’ll want to use these the most.

The second Flick is the Jump Shot, or gold shot. These are performed by flipping and hitting the ball with the tail end of your car. You’ll see a gold flash on the ball to signify that you did it correctly. Jump Shots are a little less powerful than Critical Shots, but since you get launched away from the ball, you can land quickly and follow it up with another shot, making them much more versatile.

The third and final Flick is the Dodge Shot, performed by neutral double jumping off the ball once your wheels land on it. Your wheels must be touching the ball when you double jump, otherwise it won’t count. Also, you must not be holding any direction when you double jump, otherwise you’ll just flip away from the ball. The Dodge Shot is stronger than the Jump Shot but weaker than the Critical Shot, and you usually end up out of position to follow it up. Still, it’s a powerful shot, so don’t forget about it.

Flicks are a little tricky to get the hang of, but start incorporating them into your general play style, and you’ll be able to land some sick shots!

Arguably one of the most important mechanics in Rocket League Sideswipe are Flip Resets. Under normal circumstances, you can only perform one flip in the air before you must land to do another. With the aid of Flip Resets, you can perform multiple flips without landing (technically)!

To perform a Flip Reset, all you need to do is simply land on the ball while airborne. Your car will flash white with a sparkle, and you’ll hear a special sound effect to let you know you’ve done it correctly. That’s your cue to immediately perform another flip in the direction you like.

Flip Resets are invaluable when used in conjunction with Flicks and air dribbling. An example situation would be flipping off the ground to bounce the ball into the air, then boost jumping to chase it and dribble it, then landing on it to Flip Reset. This will set you up for an easy Flick! You also get a little fuel back when you perform a Flip Reset.

As a side note, if you ever find yourself close to the ceiling of the arena, you can actually land on the ceiling for a few seconds to regenerate some fuel. Your car’s wheels will always orient themselves towards a surface if you touch it, so you don’t have to worry about manually orienting your car.

That concludes our guide on Rocket League Sideswipe. Hopefully you’ll find these techniques helpful, and let us know in the comments below if you’ve got any other tips or tricks that helped you up your game!

Rocket League Sideswipe General Guide: Tips and Cheats on How to Get Better