Home Guides Rocat Jumpurr Guide: Tips & Cheats To Getting Through All Planets

The most explosive kitty has taken to the stars, and they have a score to settle with all the hostile aliens of the world! Rocat Jumpurr is a space-faring action roguelike featuring explosive action, lots of rockets, plenty of baddies to blow up, and tons of goldfish treats to munch on!

In our Rocat Jumpurr tips and tricks guide, we will go over the basics of surviving in space as a rocket-wielding kitty. If you go down in Rocat Jumpurr, you will have to start from stage 1, so knowing how to surviving is important if you want to get through the game! Let’s get started with our Rocat Jumpurr cheats, tips, and tricks strategy guide to getting through all planets!

Rocat is equipped with a space helmet and a bazooka. By tapping and dragging, you can aim the rocket launcher and fire away. Rocat will be propelled in the opposite direction the rocket flies in which you can see by the silhouettes.

The longer you drag, the farther the rocket will launch, propelling Rocat even further. If you want to move short distances, use quick short launches but if you want some distance, drag all the way until you see the aiming line turn red.

Rocat is also affected by gravity, so if you do not launch any rockets for a while, they will begin to sink downward. This is helpful if you want to get some distance between yourself and your destination but not too much.

It should be noted that there is almost never a sense of urgency in your movement. It is better to control your path with well-aimed rocket blasts instead of just rapidly launching rockets all over the place – you are less likely to run into a hazard or enemy if you control your blasts!

As you journey through the various planets across the galaxy, you will encounter all sorts of enemies. Some will simply move around and attempt to collide with you, while others will shoot projectiles at you.

Either way, always follow the golden rule: blast them before they blast you! The more power you put into a rocket launch, the more damage your rockets will do. Take out enemies using multiple rocket blasts and sometimes they might even leave behind a power up for you!

You can also just move past enemies if you are nimble enough, but more often than not this just puts you in a worse situation. Getting hit in this game is very detrimental – do not be fooled by the amount of health you have.

Some hits can take off chunks of your health, and it only takes a few hits for Rocat to go down. It is best to just take out all of the enemies until the path forward is clear.

Your rockets will deal the most damage if you use full power and they land directly on your target. Enemies caught in explosions but not hit by the rocket directly take a little bit of damage, but it is always best to try to aim for enemies directly.

Shoot Explosives and Watch out for Flora

Littered throughout the levels are red barrels with a bunch of explosives in them. They have little shark icons on them too!

Shooting these will make them explode, and they will deal some decent damage to any enemies caught in the blast. They also do not hurt you, so do not worry about being too close.

In addition to the explosive barrels, you may also come across planet flora, like spiky cacti. Most of the flora is not destructible, but they can hurt you if you run into them, so make sure to steer clear.

Stop by the Shop for Upgrades

When you are blasting your way through the galaxy, make sure you stop and search for the shop entrance every now and then. Not all levels will have a shop, but most do – it looks like a small little box.

The shop will contain three random items that provide you with power ups and upgrades. These upgrades only last for your run, and they will be lost upon defeat, but they are the key to making it through all of the planets!

Some upgrades will improve your bazooka, while others will provide support for Rocat. The shield items will rotate around Rocat and block incoming projectiles, with some of them even reflecting shots back.

There is a variety of items for purchase, and if you do not like what you see, you can watch an advertisement to immediately refresh the shop without having to find the next one.

Also, the shop is the place to be if you are badly wounded. If you are low on health, there is a good chance that the shop will be carrying a 25% health restore item

Upgrade with Goldfish and Tokens

Shiny goldfish await you in the levels. Collect as many of these as you can – this is the game’s main currency, and you will be using it to power up throughout your run. You can find them in singles, but you can also find fish bowls full of them that are worth a lot!

Some enemies also drop goldfish when they are defeated, which gives you extra reason to take out as many enemies as possible.

You may also come across gold and silver tokens. These tokens are used for permanently upgrading Rocat, making them extremely valuable! You can find them from defeated enemies rarely or just lying around. Grab them if you see them!

When you run is over, you can use the tokens to upgrade Rocat. There are four types of tokens, and they each correspond to different upgrades for Rocat:

The gold paw tokens deal with goldfish. Goldfish storage increases your maximum cap, though this should never be a problem if you are constantly buying upgrades, which you should be doing in the first place!

Goldfish value increases how much every single goldfish is worth. Health regen increases the amount of health you get back from the lucky health pick ups that enemies drop sometimes.

We prefer to go with direct hit damage with high critical chance and rocket speed. You can take out single enemies really fast if you focus on these upgrades!

On certain levels, there may be a big fat cat blocking the way forward. He does not respond to rocket fire, so you will need to entice him with something a little more yummy!

If you look at the top right corner of the screen and see faint food icons, that means you need to get food for the kitty. These food items can be found on certain enemies – look for a little bubble that indicates that the enemy is holding food.

Some levels will require you to get different kinds of food for the kitty, so make sure to explore the whole level and blast everything you see.

That’s all for Rocat Jumpurr! If you have any other tips or tricks to share, let us know in the comments below! 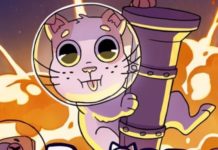 Blow Stuff Up as a Cute Kitty in Rocat Jumpurr, Now Available on iOS