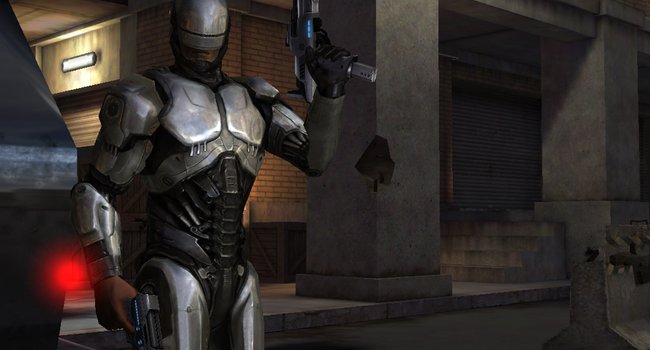 Glu have just launched the RoboCop cover shooter game for iOS powered devices and the game, as expected, is an instant hit. Everybody wants to battle crime controlling RoboCop and, if you tried your hand at it, you know that it’s not an easy job to achieve. We are here to share with you a set of RoboCop cheats: tips and tricks that will help you get better at the game and get the most out of it without spending too much money.

So let’s check out below the tips and strategies for RoboCop by Glu games for iPhone and iPad!

Shoot down the cover of enemies
You don’t have to wait for your enemies to get out of cover, on the contrary. Keep shooting at their cover at the same spot and you will eventually break it down completely if it’s a box or partially for concrete bits, while cars can explode causing damage around them. This also means that your cover is not there forever, so try to switch from cover to cover in order to avoid enemy fire and keep your cover intact for as long as possible.

Move while they shoot as they aim slower
Excepting for the cases when snipers are involved and you should move from cover before they shoot, in most cases changing cover while under enemy fire will consume less health than being directly shot upon simply because your enemies aim slower when you move.

Maximize the Research Points Numbers
Research Points are very important for the success of unlocking the Breakthrough Nodes in RoboCop without spending too much money. The more Research Points you invest in your research, the higher the chances for it to succeed. That’s why I would suggest investing nothing less than 30 RP in every research to maximize the chances of success. If you fail, you lose both the money which are not a big problem, but also the valuable research points, which are difficult to get. So play the safe card with the RPs or don’t use them at all (and you will, eventually, succeed, but lots of money are required). The easiest way to get some nice RPs is to complete the Daily Hunt missions.

Captured enemies are worth more
Whenever you see the option to Scan an enemy above their head, it means that you can capture that person by shooting down their weapon. Captured enemies give you more points, although they have no effect on the money or RP rewards that you get.

Play the Challenge missions over and over again
Once you reach the wall where you can no longer complete missions because your equipment is too crappy, focus all your energy on the Challenge missions – the more difficult, the better, because you get better rewards. Not only that you will get a nice chunk of money for upgrades, but it will make it less painful to unlock Breakthrough Nodes without the need for RPs (although it will take multiple times).

Change Cover for better aiming options
Sometimes, simply switching from cover to cover will open up some doors in terms of shooting down enemies who are behind cover. They will usually move soon after being exposed by using this method, but you still have some time to send a bullet storm towards them.

Buy new weapons
Although you might be caught on upgrading your pistols first and trying to get the best out of your costume, new weapons are really expensive and you should save for them. Getting the T2 pistol, for example, is just a matter of winning a bunch of Challenges, and should be preferred to the shotgun which is a mess at aiming.

And these would be, for now, our RoboCop tips and tricks. Do you have other strategies that fellow players would find useful? Let us know by commenting below.

Robocop Cheats: Tips & Tricks for the iOS Game by Glu