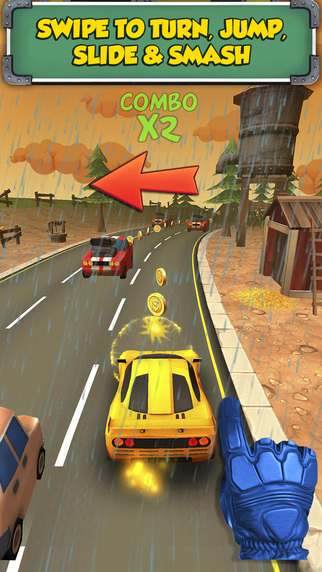 1. Sometimes you don’t have to watch the advertisement videos!

Often times you will be prompted with an option to watch an advertisement video in order to give yourself a boost. This can happen when you crash during  a level, at the end of a level, and so forth. You can kind of cheat the system: agree to watch the video, but when the actual video pops up, just hit the X button at the top right corner. This will close the advertisement but you’ll still get the bonus! You should do this at every chance you get, especially at the end of a level, which asks if you want to double your total coins by watching an ad. Keep in mind though that there are also some ads that will play automatically.

When you swipe up to jump, you can also swipe down mid-air to bring your car back down faster than normal. This is useful for mistimed jumps, hazards, and more. Don’t forget about it!

3. Collect coins as fast as possible!

As you’ve probably noticed, you get a coin multiplier for collecting a lot of coins in succession. The longer you can keep this up, the higher the multiplier will go, but it’s fairly hard to get it past x2. For starters, you need to be very fast when collecting coins. Once a row of coins has ended, find the next one, and get to it as fast as possible. You have only about two seconds before your multiplier begins to decay, which at that point filling it up again will just reset the multiplier at its current level.

4. Keep an eye out for lottery tickets!

Scattered throughout certain stages, lottery tickets will provide you with a chance at some helpful boosts should you pick them up. They have a golden aura around them, and you’ll definitely be able to spot one if you see it. Sometimes they’re tucked away between cars and other hard-to-reach places, so keep an eye out for them and grab them when possible!

5. Keep your coins for new cars!

It’s better to save your coins in order to buy new cars, rather than spend it on upgrading the temporary power ups. Since you aren’t guaranteed you’ll be able to use a boost for all the levels, just save your coins so you can get better cars.

That should be it. If you have any other questions or suggestions, leave a comment below!