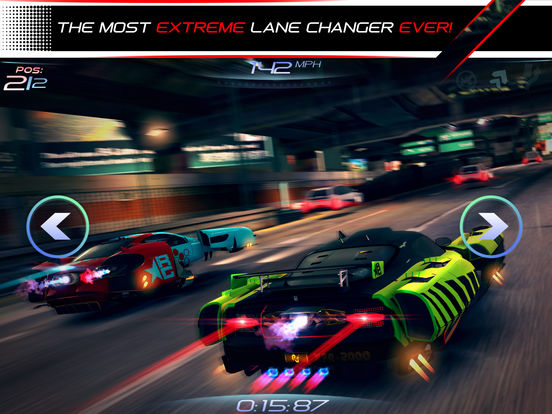 In the distant future, driving becomes automated. Cars no longer require manual input. Riders can simply step into their hover cars and input their destination. Nothing else required. There’s a small community that misses the old days of high speed races. You are a new racer in this community, and now it’s time to prove your worth! Rival Gears Racing is a adrenaline pumping racing futuristic racing game. Race a rival using your hover car and swerve in and out of traffic to gain the lead! We can help you dust the competition with our Rival Gears Racing cheats, tips and tricks strategy guide!

Aside from dodging traffic and your opponent, drafting is the next important mechanic you need to take advantage of. If you’re getting close to a car in front of you, you’ll see a “Draft Charging” message show up. While you’re drafting your boost meter is constantly refilling, which is why drafting is so important. If you can draft off your opponent your boost meter will fill up even faster! The bottom line is that you should always try to draft whenever you get the chance. If you’re in the lead, don’t change lanes right away when you see an incoming car. Stay in the lane for a bit to get some draft charge but not too long – you don’t want to crash!

2. Start out with the free races!

Before you even think about doing the bet races, we highly recommend doing a couple of free races. Get used to the controls and the timing of boosts, switching lanes, and drafting. Don’t worry if you lose since free races are… well, free! And even better – you’re still rewarded if you win. There’s nothing to lose here in free races!

The game actually skips something important about boosts – you need to time them. Boosts aren’t just press-and-forget kind of deals. When you have a boost charged and ready, watch the meter at the top of the screen. It’ll constantly refill and empty itself as it hits its maximum capacity. Try to time it so that you activate it right when the bar is full for a Perfect Boost. Be careful! If you’re too late, you’ll activate boost when the bar is near empty, leaving you with a minimal boost. As you can guess, precise timing is super important!

Going off of tip number 3, each race starts out with both cars rolling into the streets. As the timer counts down, you’ll see that your boost meter is active. This is the starting boost and nailing down the timing is crucial to your victory. Depending on how close your opponent’s car is to yours in terms of upgrades, the starting boost can possibly give you a good enough lead to win you the whole race. Watch out – the starting boost meter fills at a faster rate than normal, so watch your timing!

Once you’re out of the tutorial you’ll be given timed missions. They show up at the top left corner of the screen and require you to do a specific task. Try to complete these as soon as you can as they will expire after a certain time period. The longer the task is, the more time you’ll have to complete it. Don’t wait on it though! When you complete a mission, you’re given a box of random parts.

6. Upgrade as soon as you can!

Upgrades – as little as they seem – can make all the difference in this game. The second you have enough parts to upgrade your car, do it! Even if you don’t have enough parts, check to see if you have enough cash to substitute. If you have the time, you can watch advertisements in the garage to receive a free upgrade box. The only other way to receive boxes is through leveling up and completing missions.

That’s all for Rival Gears Racing! If you have any other tips or tricks to share, let us know in the comments below!