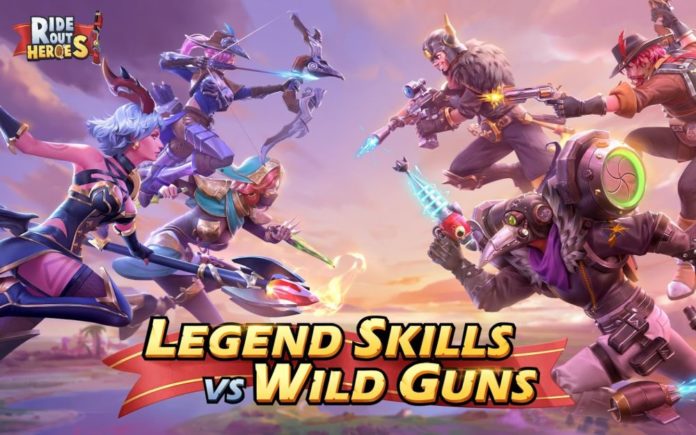 NetEase Games’ latest foray into the battle royale genre is Ride Out Heroes, a new battle royale game that mixes hero shooting elements into the mix! Choose from a variety of heroes each with their own unique abilities that will add more to the gunplay!

Our Ride Our Heroes tips and tricks guide will go over the basic and advanced mechanics of the game so that you are well-equipped to win a match. Let’s get started with our Ride Out Heroes cheats, tips and tricks strategy guide to winning your first royale!

There are a total of nine heroes in Ride Out Heroes. Will you wield a powerful ancho as the Pirate King Ragnar? Or will you sneak your way around the competition as the Phantom Agent Tania? There are plenty of heroes to try out, so experiment and see which ones you like!

Although, if you are just starting out, you will be limited to only Dark Succubus Lilith, Dancing Assassin Hasan-e, and Greenwood Ranger Robin. Each hero has two unique abilities and two unique weapons that only they can wield.

Lilith uses dark magic to create powerful area of effect spells, Hasan-e uses trickery and stealth to paralyze her foes and finish them off, and Robin has access to plenty of long-range weaponry.

Which ones are the best? That’s for you to decide! All three heroes are viable in the right hands, so just try them out and see which one you like the most.

Stay aware of your surroundings!

Keep your head on a swivel and perk your ears up – the key to surviving a battle royale is to always be alert. Listen for sounds, and look around your environment to make sure no one is sneaking up on you.

To help you out, if you are within earshot of gunfire, your compass as the top of the screen will be marked with the direction the gunfire was coming in. You can either check it out or stay clear of that direction.

And, as always, be aware of the fog ring as it enlarges and shrink the playing area. If you are caught out in the fog, you will take damage over time, and it is very easy for players to pick you off if they see you.

Every single piece of gear, weapon, and ability in Ride Out Heroes is listed by rarity. The higher the rarity, the stronger the gear. The rarity goes like this:

Your hero will automatically pick up a higher rarity version of the weapon or ability in question if there is one around, so there is no need to manually track these rarities. Just keep the colors in mind – when you have a full loadout of yellow, you are good to go!

Stay on your mount when moving between buildings!

Something usually not found in battle royales is the addition of mounts. At any point in time you can summon a big raptor who will ferry you across the land at high speeds. Seriously, do not sleep on how fast your raptor moves!

If you are moving around out in the open, you are very vulnerable to prying eyes. Hop on your mount to become a fast moving target, making it much harder to for snipers to try to pick you off. You can also use it offensively too – chase down wounded targets trying to escape to secure the kill.

Head to the shrine for guaranteed legendaries!

Every so often, you will get a notification that the shrines are now open. When this happens, you will see yellow chests appear somewhere on the map. As soon as they pop up, start heading towards them… and get ready for a fight!

A shrine can be prayed to up to a total of two times, which means that if you get both prayers you can get a grand total of 4 legendaries! If you do not have a legendary piece of gear yet, head on over to the shrines.

As we mentioned though, you will more than likely encounter other players en route or at the shrine, so be prepared to fight. You will never know how armed they are, so be on your guard!

Unlock talents to power up your hero

Each hero has a talent ring that can be accessed under the hero menu. Here, you can unlock permanent passive abilities and upgrades to existing skills for that hero. To do so, you need to spin the talent wheel, which costs gold and that hero’s energy.

You do not get to pick what talent you unlock next – it is completely random, but you cannot get duplicates. You will always unlock a new talent with every spin, so do not be afraid of wasting gold. Your hero’s ultimate talents can be upgraded at any time as they exist outside of the wheel.

You can get hero energy by completing the daily missions and visiting the shop. Daily missions also award you with gold, gems, stars, and more. Stars are particularly important as they fill up the star chest. When it is full, you can open it to get a bunch of random rewards.

In addition to the daily missions, there are also weekly quests that offer more long term goals. You will need more time to complete these of course, but their rewards are far greater than the daily mission rewards.

Lilith is played best when she controls the area around her opponent. Her Medusagazer can slow enemies and immobilize them if they are hit enough. Use this first, then switch to her Flame Staff to really lay on the pain. Use her weapons in conjunction with her Shade Array to ensure that opponent cannot escape!

Hasan-e can take out her opponents with deadly speed if she can get the drop on them. Use her Shadow Lurk to vanish and leave a clone behind. When your target is confused, get close to them and blast them with her Fly-daggers. The Fly-daggers work like shotguns – the closer you are to your target, the better.

Hasan-e throws out three daggers at a time, and these daggers do a whopping 420 damage! If you can land all three daggers on your enemy, you will do some serious damage, so good accuracy is key when playing Hasan-e.

As for Robin, she is best played at medium distances. Her Crow Longbow needs to be charged before you can fire it, but it has great range and crazy high damage (1120 damage). If you have good aim, you can pick off several foes from a safe distance.

If enemies are getting too close, her Chaser Bolt might be a better option. This thing acts like an SMG, with a medium rate of fire and decent damage. The bolts also have a slight homing feature on them, so they are perfect for quick opponents.

Fill up the Season Pass for more rewards!

In addition to filling the star chests, stars awarded from completing daily and weekly missions also fill up your Season Pass. The Season Pass lasts for, well, the season, and you can get lots of awesome rewards from it, including gold, gems, skins, and glider skins too!

There is a Premium Pass that offers even better rewards, but you have to pay real money for it. The free Season Pass is good enough if you are looking for just basic rewards!

That’s all for Ride Out Heroes! If you have any other tips or tricks to share, let us know in the comments below! 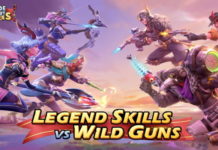