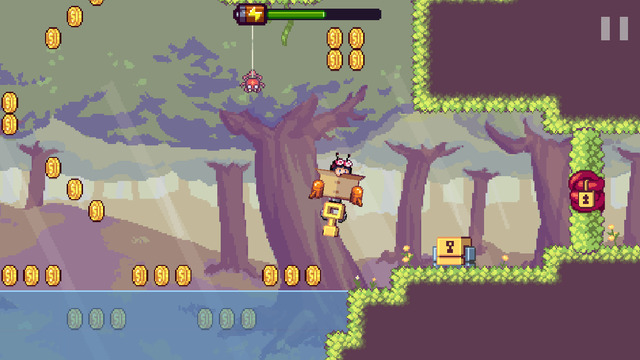 If you’re into retro-inspired titles that are easy to pick up and play on the go, you definitely need to check out a vaery interesting new title that’s now available on the App Store.

The new game is called Sky Chasers and it’s been developed by Lucky Kat Studios, a team that poured plenty of love in their game. In Sky Chasers, players will control a young kid named Max as he travels through a variety of stages in his rocket powered cardboard box. Players will have to avoid enemies and traps while keeping an eye on their fuel reserve, as once its gone, Max will have to start over from the last checkpoint.

Sky Chasers may seem a pretty straightforward experience, but there are some nice touches that make the whole experience more interesting. During exploration, players will have to interact with a variety of objects, objects that are required to solve some very simple puzzles. Picking these objects will weight the box down, so players will have to adapt when carrying items around.

Sky Chasers is now available on the App Store for free in all regions.