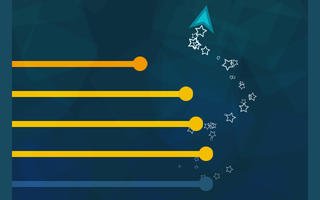 I love playing Reckless Run! It’s that type of an “impossible” game that doesn’t get extremely frustrating, with you dying during the first two seconds. Yet, it’s really difficult and at the same time addictive – the perfect ingredients for an amazing game. But we are not here to praise the game, we’re here to talk about some Reckless Run cheats: tips and tricks that will hopefully help you get the most out of the game and score the most points.

So let’s check out below our ultimate strategy guide for Reckless Run with tips and tricks to keep on going!

1. Stick to the middle
As soon as you get past some obstacles, go back to the middle of the screen. The closer you are to the middle, the easier it is for you to avoid the incoming obstacles. If you’re too far left or right and those long pipes appear from the same side, you won’t have enough time to avoid them. The same goes for circles: although it’s usually easier to get past them on the sides, stick to the middle because you don’t know what’s coming next!

2. You can still hit the obstacles
You are not allowed to go head-first into the obstacles, but if you touch them with the sides of your ship, you are still allowed to keep going. Of course, your goal and gameplay should be based on avoiding them altogether rather than hitting them – but it’s good to know that even if you touch them with the sides, you can still carry on playing.

3. Get all the stars
Whenever you enter a “stars” stage, do your best to get as many as possible as each star gives you one extra point. There are no obstacles either during this stage, so you can really score high!

4. Play on an iPad
I know that this is an iPhone only game, but if you have the option to choose, play Reckless Run on an iPad – the bigger screen makes it easier for you to control the ship, and it’s easier to see the incoming obstacles as well.

5. Rest your eyes
During my first playthrough I only lasted for 6 minutes before I felt my eyes getting tired. The speed of things really puts some pressure on your eyes and they will tire quickly. Tired eyes means a lacking coordination and the impossibility to play the game at your maximum level. So rest every 10 minutes or so!

You can check out my first Reckless Run gameplay with some really nice recoveries, but still a really low score:

Do you have any other Reckless Run tips and tricks to share with fellow players? Let us know by commenting below!