Home Guides Rebel Inc Achievements Guide: How to Unlock them All

Are you looking for a guide to unlocking all the achievements in Rebel Inc? We’re going to share that with you in today’s article and hopefully you’ll be able to get them all ASAP.

Although you’re not getting any in-game bonuses from completing all the achievements in the game, it’s nice to have them unlocked for bragging rights. Also, some are more difficult than others and you might struggle to get them unlocked. We’ll have all the details on how to unlock the Rebel Inc achievements in today’s article, so we’ve got you covered.

So let’s not waste any time and instead, let’s get straight into business and find out how to unlock all achievements in the game! Some of them will be pretty self-explanatory, while others will require some extra details. 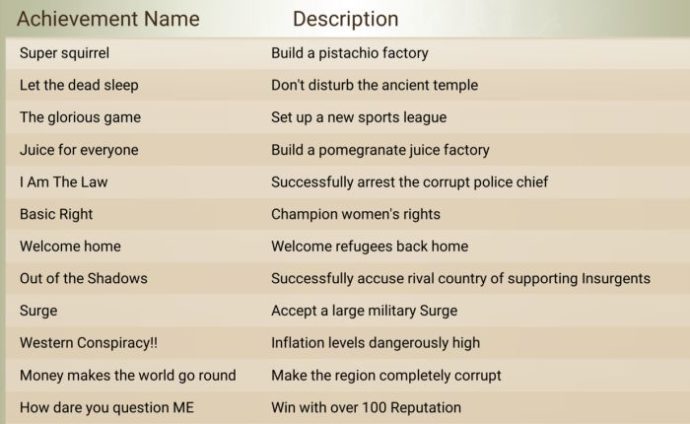 Desert Storm: Allow soldiers to be redeployed to another warzone (this happens via an in-game event and you you should choose the option to let them go – even just for a while – when prompted).

Nope: Reject a peace deal with the Insurgents.

Have your say: Successfully hold democratic elections (this is easier done when the Insurgents are pretty much under control, so that they don’t interfere with the elections).

Peace is for wimps: Win a game without finishing a peace process (easier done on lower difficulty)

Harder than it looks – Lose a game.

Pacifist: Win a game without any National Soldiers (easier done on Casual)

Super Squirrel: Build a pistachio factory (this happens during an in-game event. Still trying to figure out if there’s a particular route you can follow to unlock this faster). 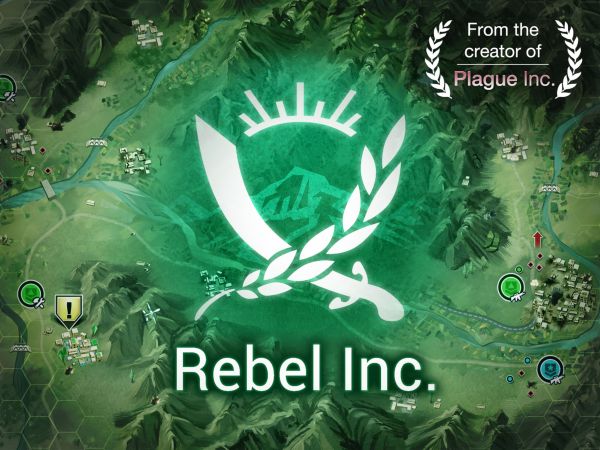 Juice for everyone: Build a pomegranate factory (see above)

Let the dead sleep: Don’t disturb the ancient temple (again, an in-game event that you will sometimes get. Choose not to disturb the temple from the multiple choices menu)

The glorious game: Set up a new sports league (Haven’t unlocked this yet, but probably done through an in-game event as well)

I am the law: Successfully arrest the corrupt police chief (Usually happens when corruption levels are really high and you successfully complete the multiple choice option to arrest the police guy).

Basic Right: Champion women’s right (you will sometimes get this event with multiple options – choose the route to fully offer rights to women and you’ll get it)

Welcome home: Welcome Refugees back home (again, an in-game event that will sometimes be triggered. Not sure if there’s anything in particular that you do to trigger it, but when you get it, make sure to bring the refugees home to unlock this achievement).

Out of the Shadows: Successfully accuse rival country of supporting Insurgents (you need to have the Government Operations unlocked to reduce neighboring countries support for them. Eventually, you will get a random event that allows you to accuse a country).

Western Conspiracy: Inflation levels dangerously high (simply purchase a lot of Initiatives in a row in order to have Inflation get close to maximum levels)

How dare you question ME: Win with over 100 Reputation (a lot easier done of Casual)

Well travelled: Win a game on every map

Everything is Awesome: With a game with every governor

Persistent Person: Beat every map with every governor on Casual

Successful Strategist: Beat every map with every governor on Normal

Glorious Genius: Beat every map with every governor on Brutal

This would be our guide to unlocking all achievements in Rebel Inc. If you have further questions, let us know by commenting below. Also, if you have some easier methods to unlocking the more difficult ones, we’d be happy to hear them.

Finally, if you’re looking to get better at playing Rebel Inc, we have some guides written just for you. So you might want to look at some general tips & tricks in our guide, or an in-depth guide on winning on Brutal difficulty. Even more guides are coming soon, so make sure you check back often. 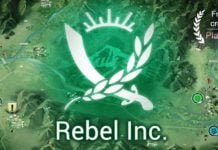 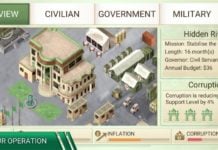 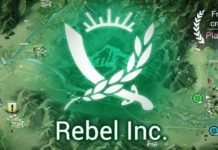