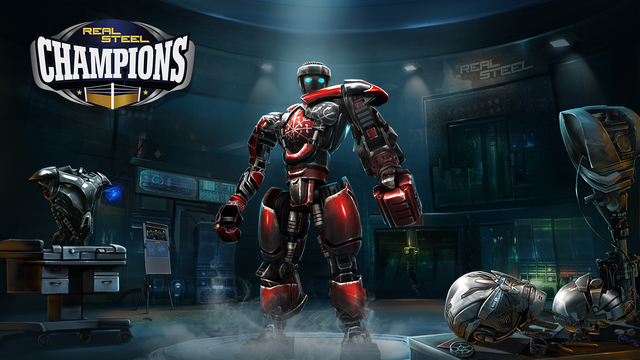 The robots are back in this action-packed sequel to Real Steel World Robot Boxing. Real Steel Champions once again tasks you with crafting your own robot from scratch and pitting him against other upcoming fighters. We’ll help you build the ultimate robot and dominate the competition with our Real Steel Champions cheats, tips and tricks strategy guide!

1. Combine directions with punches to do varied attacks!

If you tap your attack buttons normally, you’ll do straight punches. However, if you’re holding a movement direction while you tap attack, you’ll do an alternate attack that corresponds to that direction. Mix up your attacks to keep your opponent on their toes and hopefully trip them up!

2. String together attacks in rapid succession!

You have two types of attack: a light punch and heavy punch. If you perform a light punch then heavy punch immediately after, you’ll string them together into a combo. Be relentless so that your opponent doesn’t have an opportunity to guard! Combine this with tip #1 and string in alternate attacks to do some crazy combos.

Buying new parts for your bot is a big way to improve your bot’s stats, but don’t forget about the passive upgrades. These upgrades will always apply no matter what parts you have, so in the long run they’re much more beneficial than new parts. Even better, they’re relatively cheap starting out to upgrade. There are five categories to upgrade, each one improving a different stat for your bot. One improves your critical rate, two for your armor, and two for your power. Everything is important so keep them all upgraded!

As far as we can tell, the various moves you can buy have no statistical differences. They only look different! One move does not do any more damage than another move, so you’ll be better off if you save your money for other important things, like upgrades and new parts.

There are various achievements you can accomplish throughout the game. If you complete one, the trophy icon at the top left will have a number next to it. Go here and collect your rewards for the achievements you do, as sometimes you’ll be rewarded with gold coins, the premium currency!

6. Try out Time Attack for some extra experience and coins!

As you’re progressing down tournament mode, you’ll eventually come across a super powerful robot. If you’re severely underpowered compared to your opponent, the game will warn you. In this case, spend some time in time attack mode. In this mode, you’ll face random opponents, but they’re pretty easy to beat. It’s an easy way to earn some extra coins so you can upgrade your bot.

Now you’re ready to become the ultimate champion! If you have any other questions or suggestions, leave a comment below!