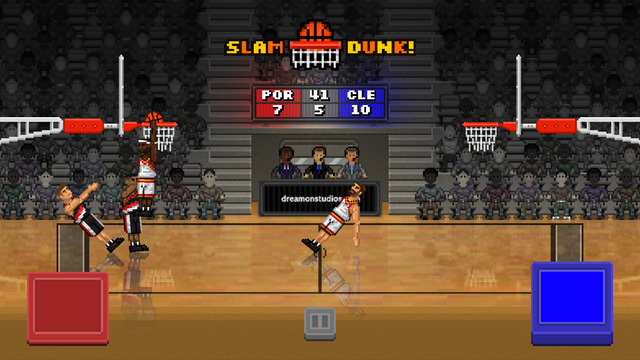 Real Bouncy Basketball comes to you from the team that brought you the wacky Hockey Hysteria! Much like that game, Real Bouncy Basketball is a simple one-touch game where you play out a 2-on-2 basketball match. Tap to jump, move, and block! The game is very fun and addicting, but it’s also really hilarious thanks to the silly physics of the players. Even though it’s simple, there’s a lot to master here so let’s get started with our Real Bouncy Basketball cheats, tips and tricks strategy guide!

The best time to shoot is at the apex of your jump, and a high jump at that! Basically, you want fully charged jumps most of the time. When you have the ball in your hands, wait for your jump to recharge, jump as high as you can, then let go of the button to make your player shoot. If you do this while standing upright with no interference from the opposing team, you should be able to make most of the shots.

If you shoot from your side of the court, it’ll count as a 3-pointer, netting you – you guessed it – 3 points! 2-pointers happen past the halfway marker on the court towards the opposing team’s side. Essentially the closer you are, the less points you’ll receive. However, there is one more move you can pull off: the quintessential slam dunk! If you have the ball and you’re directly under the hoop, jumping will make your player slam the ball into the hoop. This scores you some points and you’ll look awesome while doing it!

If you notice, players will hold their arms way up high for as long as you have the button held down. It’s actually possible to block shots that are going for your hoop if you time your jumps well. Be careful, as the opposing team can do this as well! If you have the ball, try to fake them out by shooting a bit sooner or later. Wait until they land when they jump to block, then let go for a free shot.

If you’re quick on the ball (see what I did there?), you can actually steal the ball right out of your opponents’ hands! Keep in mind that your hands aren’t considered “active” unless they’re actually moving, so if your hands just happen to bump into the ball while the other team has it, you won’t steal it. Instead, tap the button a little to make your player raise their hands a bit, and if they collide with the ball, they’ll steal it! Seize the opportunity and score! Just be careful not to let it happen to yourself!

That’s all for Real Bouncy Basketball. If you have any other tips or tricks to share, leave a comment below!