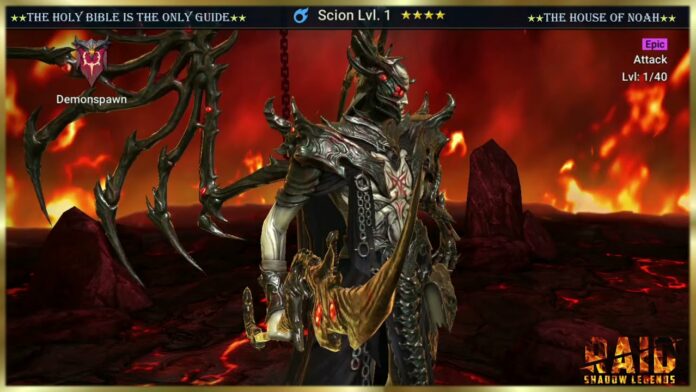 RAID: Shadow Legends is one of the most popular mobile RPGs in this industry. There you will need to collect champions that belong to different factions, level them up, get the best equipment for them, and fight different enemies. In order to form a strong squad, you will need to learn about all factions and their champions. Today we are going to talk about a Magic damage dealer of the Demonspawn faction. This guide will tell you about Scion in RAID: Shadow Legends.

Scion in RAID: Shadow Legends is an Epic Magic damage dealer that belongs to the Demonspawn faction. He is quite fast and has a good Attack stat. However, he really lacks defense and HP. So, you should protect this champion with your tanks and heal him with your support characters. You are able to obtain Scion as a Daily Login Reward. So, you shouldn’t really expect that he will be the strongest game-breaking damage dealer. You will be able to replace Scion with someone stronger soon enough.

Scion in RAID: Shadow Legends is a squishy damage dealer that is able to remove debuffs from himself and apply different debuffs on opponents. His Aura skill increases your squad’s Crit Rate in Dungeons. The passive skill is called Incarnate and it makes opponents unable to decrease Scion’s Turn Meter if they have Block Active Skills, Block Buffs, or Heal Reduction debuffs applied on them. It works nicely with the active skills of this champion.

Scion’s auto-attack is called Nightmare Khopesh. It deals damage to a single target and applies Block Active Skill debuff on it. The first skill is Evil Seed. It deals damage to a single target and ignores any kind of Shield buffs. Also, it applies Block Buffs and 100% Heal Reduction debuffs on the target. The second skill is called Crawling Chaos and it deals AOE damage to all opponents, removes all debuffs from Scion, and buffs him with 50% Increase Attack buff and 30% Increase Crit Damage buff.