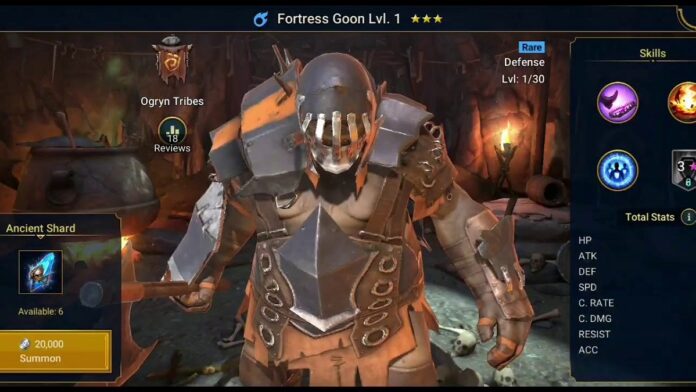 The game heavily relies on its Champions, of which there are a whopping 400+! These Champions are divided into 4 Affinities (Magic, Void, Spirit, Force). Players can recruit new Champions collecting and summoning souls of warriors from 4 different shards:

Depending on the type of shard, more powerful warriors can be spawned. Champions change on a regular basis, removing a lot of older champions out of the meta. Some of the older Champions that are still relevant, called Legacy Champions, work well with the new features introduced to the game.

Today we will be talking about the Top 10 Best Epic Legacy Champions (in our opinion) in RAID: Shadow Legends.

10. Zargala
Zargala is a Force affinity Epic Champion from the Orc faction. She loves to read and really benefits from the skill tomes to reach her potential. She has one of the hardest hitting AOE triple hitting decrease defense abilities in the game. She can offer real team support almost anywhere with one of the greatest abilities in the game: AOE Decrease Defense.

9. Doompriest
Doompriest is a Force affinity Knight Revenant Epic Champion that is often overlooked. She is one of the most valuable champions to take into Clan Boss when the affinity changes to Force, Magic, or Spirit. This is because she has a passive which will cleanse debuffs off allies as well as the Clan Boss. She has the same impact in a lot of dungeons such as Dragon, Ice Golem, and Spider, helping your team stay alive through the cleanse and heal passive ability.

8. Mausoleum Mage
Mausoleum Mage is a Force affinity Epic Champion from the Undead Hordes. He is one of the best epics in the game with a kit suitable to help you take your teams through content to the end game. Best-equipped with high defense and high speed he can help keep your team alive with strong buffs such as Increase Defence and Block Debuffs. He also has an A1 which can provide speed, healing, and cleansing the debuffs from your team.

7. Skullcrusher
Skullcrusher is a Force affinity Epic Champion from the Ogryn Tribes. He is the only Epic Champion to provide a buff that gives your entire team Counter Attack. Due to this, he is one of the most sought-after champions in Raid: Shadow Legends. His techniques also deal a huge amount of damage against the Clan Boss. Skullcrusher also applies an Ally Protection buff to his team and Unkillable buff to himself when the Counter Attack buff is placed, meaning he adds even more utility and enables your team to stay alive much longer into fights.

6. Jareg
Jareg is a Magic affinity Epic Champion from the Lizardmen faction. He is one of the best Decrease Attack champions for the Clan Boss, especially if paired with a second champion capable of doing an Ally Protection ability. Despite having multiple Legendary Champions who could fill this spot, the combination of Jareg with Skullcrusher outperforms them all with the ability to swap Ally Protection buffs throughout the fight and keep the rest of the team alive. Jareg also brings an Increase Defense buff and a passive heal ability. He works amazingly well as a protector, especially strong in order to assist your damage dealers.

5. Seeker
Seeker is a Magic affinity Epic Champion from the Undead Hordes faction. He is one of the strongest turn meter boosters in the game because his ability grants him an extra turn, therefore making his turn meter boost actually run on a two-turn cooldown! He is a top tier Champion in certain Clan Boss teams, such as a Batman Eater team composition, while also being a part of the highest damage output team for Unkillable compositions with other Epic and Rare Champions. Seeker is also fantastic in the Arena as the player’s Speed Boost champion with the caveat of a passive ability boosting the player’s team defense if they do not go first on their turn and end up taking a big hit.

4. Gorgorab
Gorgorab is a Magic affinity Epic Champion from the Undead Hordes faction. He is an amazing mid-game Champion that is able to carry the player through most content in RAID. Gorgorab’s strengths are in the Arena, where he brings a speed aura, turn meter boost and Increase Attack buff, and Faction War where he revives fallen allies, which ensures a 3-star completion for the level. Book investment would only be preferable for Dungeons and Faction War.

3. Alure
Alure is a Demonspawn Epic Champion with the best turn meter manipulation skill in the game. This ability is the best in her kit of spells by leaps and bounds. This means that she is an amazing Champion without needing books to improve any of her skills. In the Fire Knight boss, Alure can keep the Knight’s shield off once it has been removed for the first time by herself. Alure also has a great showing in Faction Wars, especially for the boss encounters ,and is also holding her own in the Doom Tower exceptionally well. She shines the brightest against bosses like Borgoth the Scarab King and Agreth the Nether Spider.

2. Sinesha
Sinesha is a Force affinity Epic Champion from the Knight Revenant faction. She has a double hitting ability which attacks twice when facing someone with less than 50% of their HP. She pairs really well with Skullcrown, activating partnership passives. Sinesha also brings a healing ability as well, which makes her perfect for Faction Wars in a faction short of healers, due to her versatile utility. Her strongest area of the game is the Arena, especially when set up in a Blender composition partnered with another AOE Champion and an Ally Attack Champion.

1. Tayrel
Tayrel is a magic affinity Epic Champion from the High Elves faction. He provides tons of high powered debuffs that are relevant in all content. His signature move decreases the defense of all enemies and allows your damage dealers to kill the enemies much faster. Tayrel also has a primary skill which, when booked, is very consistent at making sure that the Clan Boss will always have a Decrease Attack debuff. He has another amazing ability that gives its best utility in Spider or Faction Wars, decreasing the turn meter of a single target enemy.

He is widely considered by most players as the best Epic Champion in RAID: Shadow Legends and is highly recommended to use in most team compositions, despite being a Legacy Hero!

Do you agree with our list? Let us know!