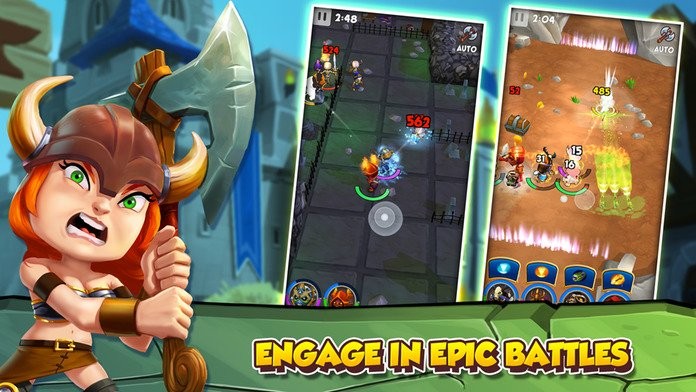 Kongregate has just launched an amazingly addictive (and, I might add – complex) game on the App Store and we’ve been spending the entire day so far playing it and destroying waves after waves of enemies, completing missions and wondering what to do next. There is still a lot for us to figure out in the game, but we already have a solid grasp of how things work (self assessed) so we’re here to share with you some Raid Brigade cheats and tips: learn how to star up your heroes, how to upgrade items, how to become better at this game and win all your fights. It will be fun!

So let’s not waste a single second and instead let’s check out below some Raid Brigade tips and cheats!

1. Keep your Power Attacks
The good thing about the Power Attacks / Special attacks of your heroes is that you can stock them up easily and I would recommend doing so: if you fill up your meter, you can get 2-3 attacks, and they are pure gold against the final boss. Don’t just waste them: if you have a large group of enemies and the power-attack will help you take them out easier, use it. But otherwise, hold onto your power attacks and all your boss battles will be like walks in the park.

2. The “Run and fun” strategy
Not so fun actually, but I didn’t manage to find a better name. Here is what I do: I run forward with my Archer and start shooting enemies from far away to activate them. They will charge, coming in to attack my archer, usually ignoring the rest of the heroes. And now the “fun” part begins: I run in circles, while the other heroes take them out without a problem. No damage suffered, everybody happy. And if you don’t admit you’re doing it, like I do, nobody will call you a chicken either!

3. How to Star Up your Heroes and Items?
Probably the biggest question most of the people have early on is how to star up their heroes and items in Raid Brigade, and the answer is not as difficult as you might think (nor is the game bugged). In order to Star Up an item or hero, you need two of the same kind, but they must be uncommon or better: combine them and they star up. However, in order to be allowed to do it, both items/heroes need to meet the minimum level requirements.

It’s worth Starring Up your Heroes especially, as they will get not just a nice boost in stats, but also a new passive ability that will be randomly activated (or always active) in the game, giving them a huge bonus in battle.

4. Always consider the Magic Schools!
The game follows some simple rock – paper – scissors mechanics, meaning that one element does more damage to another, but receives more damage from a third. In other words, Fire beats Ice which beats Arcane which beats Fire. Light and Dark cause more damage to each other, so they basically cancel themselves out until equipment comes into play.

Items also improve the stats/resistance numbers of your heroes. For example, placing a Fire item on a Fire Hero will increase their attack or resistance against Ice enemies (depending on the item you equip), but if you equip a Fire item to Ice or Arcane heroes, you get no such boost.

5. Focus on upgrading your buildings!
It’s vital to keep upgrading the buildings in your town, because you will eventually find out that the resources – of which you thought you had aplenty of, are scarce. Stock up on resources and help bring up production by constantly working on your town too!

These would be, for now, our Raid Brigade tips and tricks for beginner players, but we’ll come shortly with more advanced strategies and guides for this great game. If you have any tips of your own, don’t hesitate to let us know by commenting below!