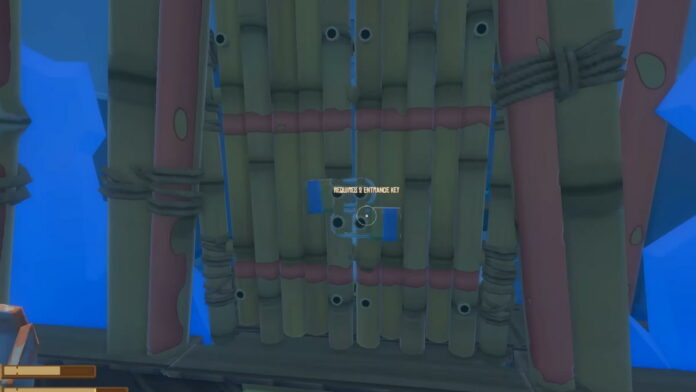 The third chapter of Raft is finally here, and with it comes the exciting conclusion to the game’s story. The final area of the third chapter is a floating city straight out of the film Waterworld, fittingly named Utopia. Players will follow clues left behind by someone named Detto, and one of the puzzles involves getting inside the city. Today, we’ll walk you through it all with our Raft: Utopia entrance key location guide!

Where to Find the Utopia Entrance Keys

When you first set foot into Utopia, you’ll be in the outer skirts of the floating city. As you make your way towards the center, you’ll eventually run into double doors that are sealed with two tough locks. You’ll need to find two Entrance Keys to get inside.

To find the first key, simply go around the corner to the right of the double doors. Follow the path, and you should come across another door that is covered in chains and a padlock that requires the Master Key. Ignore that for now, as the first Entrance Key and a note are on the floor in front of the door.

Related | How to Get Wool in Raft: Wool Locations Guide

The second key is a bit harder to find. Head to the gigantic farming plot near the center of the city, and then look for a little hut with a spiral staircase on the side of it. If you’ve collected most of the notes, you should have all of Detto’s code, which you can input on the keypad to get inside.

Inside the hut you’ll find the blueprints for the Big Backpack, but most importantly you’ll find another Harpoon. You should have another Carbon Dioxide Canister from earlier, but if you don’t, you can find one by Utopia’s water tank.

With at least one Harpoon and Carbon Dioxide Canister, you’re ready for the next step. Head up the spiral staircase that’s on the side of the hut to end up on the roof. You should see another set of stairs, so go up those as well.

And that’s it—you should now have both Entrance Keys needed for the main door. We hope our Raft: Utopia Entrance Key guide helped you out, and if you have any other questions, let us know in the comments below!