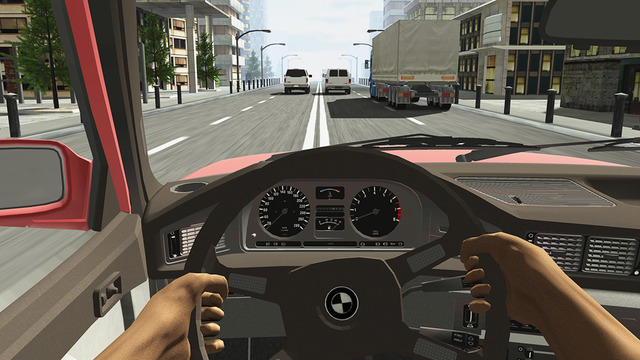 Racing in Car is a racing game that sounds more dangerous than the name implies! Drive quickly as you bob and weave through traffic, attempting to overtake as many cars as you can to set the new high score. We’ll help you become a car racing pro with our Racing in Car cheats, tips and tricks strategy guide!

1. Stay as close to the cars as possible!

So, we were a bit confused at first because the game doesn’t really state how to score points. It turns out that you have to “overtake,” but notice the quotes. The game has a very loose definition of overtaking; we found out that the best way to score is to zoom by cars but as close as you can. You don’t even need to overtake them, you can just stay in your lane and as long as you’re almost touching their sides, it’ll count as points.

Often times, you’ll come up to a group of cars that block all lanes. Sometimes they’ll even be moving at nearly the same speeds, so you’re going to have to wait. When you see cars line up ahead of you, be sure to use your brakes. If you just even so lightly tap a car, you’ll be thrown off course and the game will be over. Don’t go too fast!

Your starting car’s maximum speed is around 130 kph. This is really fast, and if you’re up to it, you can overtake a lot of cars with that speed. One slip-up though and it’s all over! If you’re not feeling confident, it’s quite alright because there isn’t any “speed” bonus anyways. The only advantage going fast gives you is the opportunity to get through clusters of cars at a faster yet deadlier pace. Take your time if you want; remember that the most important thing is that you don’t crash!

There is a small trick we discovered when it comes to overtaking cars. When you’re passing a car, the second the car disappears from your camera view, the car is considered “destroyed”. This means that you can switch lanes quickly if you need to. This is helpful to keep in mind in the situations where you’re trying to weave through heavy traffic.

The better cars have bigger score multipliers on them, which means you get more coins and points. You need to start saving up for them right away though, because they’re pretty costly! Don’t spend 5000 gold on the new track, however. It’s not worth it; just save up for your new car.

That’s all for Racing in Car! If you have any other tips or tricks to share, leave a comment below!